Fresh from the kiln 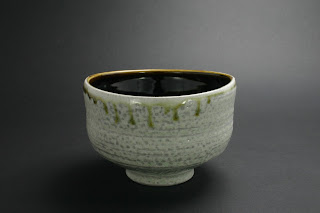 Just unpacked the firing and the results were very pleasing! Some excellent new tea bowls for example. This Chawan was at the fire face so the ash has built up on the front of the bowl and formed runnels down the vertical surface. The black glaze inside is mirror like and will look majestic when it contains green tea! 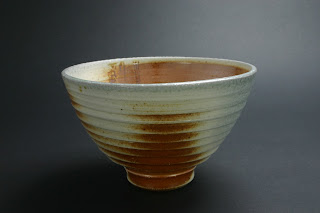 Towards the middle of the kiln this Tea bowl shows stronger reds and oranges. I have used a clay with slightly more iron, and there is a lustrous patina on the inside where the igusa straw has marked the bowl. 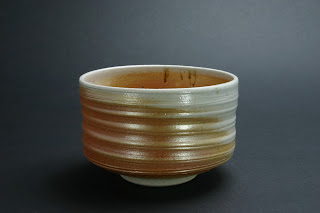 A smaller tea bowl for the outdoor tea ceremony was near the bottom of the kiln and has developed an almost pearlescent surface over the soft orange flashing.

The Tea bowls will be included in the Tea bowl Exhibition at Gallery St Ives in Tokyo which starts later this month. http://www.gallery-st-ives.co.jp/
It coincides with the "Totally Teabowls" exhibition at Oakwood Ceramics in the UK, for which they have published my essay "Just My Cup of Tea" in their magazine section. http://www.oakwoodceramics.co.uk/MagazineEuanCraigMyCupofTea.htm 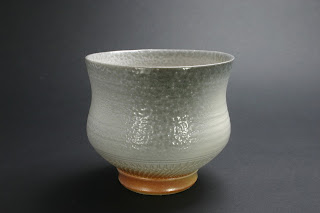 Other tea ware also came out of the kiln, like this "Kensui", a bowl for discarding the hot water used to wash the tea bowl in the tea ceremony. It is taller than a tea bowl, with a wider, more stable foot and a flared rim avoid spillage. 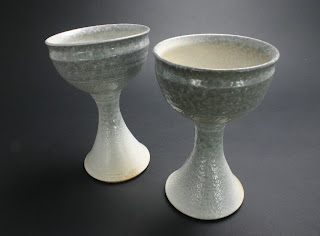 Apart from tea ware the wine goblets came out with excellent carbon trapping and transluscency. 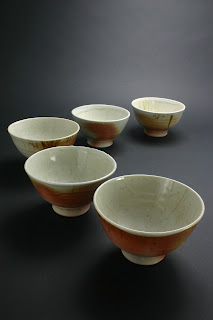 There were also two varieties of "Kumidashi" tea cups, which are used for serving tea to guests in a more informal situation. Tea would be poured into them from a "Kyusu" tea pot. This design is like a small version of a "Gohan Chawan" or rice tea bowl. 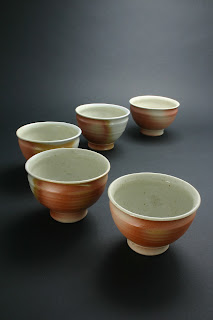 These kumidashi are collared slightly at the lip to make them more comfortable to hold and drink from. Usually sets are of five pieces, as six is too many and four is unlucky. The word for four, "Shi", is pronounced the same as the word for death, so five it is!
Posted by Euan Craig at 21:16