You may remember by blog entry "Safety First" , concerning the food safety standards for functional pottery in Japan. I have been asked by some of you for more information about this, so I have read the notification in the original Japanese and the following is my brief interpretation of it in so far as it applies to functional ceramics. The law applies to Glass, Ceramics, Enamel and other food vessels and packaging, so I won't deal with the full scope of the law. I am, after all, Euan the Potter.

According to notification #416 of the Japanese Ministry of Health, Welfare and Labour, as of the 1st of August 2009, it is required for all manufacturers and importers of ceramics for food to conform to the standards set by the International Standards Organisation for levels of heavy metals, specifically Lead and Cadmium.

These safety levels are based on the amount of Lead and Cadmium which can leech into a liquid from the vessel under set test conditions. These levels and conditions are set out in the second table on THIS LINK.

The notification does not state the method by which these standards will be enforced, but department stores in particular are asking for certification of safety in Japanese before vessels can be sold. This is probably in line with the Public Liability Laws which were introduced a few years ago making the manufacturer and retailer responsible for injury to customers due to faulty or dangerous products. I believe that it is required by customs for imported ware, and as I was required to provide this for Mitsukoshi, and my pots are made in Japan, it seems to be required for domestic sales as well. I have only been asked by department stores, however, so I am unsure of the extent to which certification is required.

It only applies to vessels for food. In particular it is important with low fired lead glazes and on glaze enamels, but it applies to all food vessels. Within Japan testing can be done in a variety of places, but I recommend the Tajimi Ceramic Institute. Their home page outlines their testing methods and costs. One representative sample of work should be sent for testing, and they return it. I do not know whether they accept work for testing from overseas.

So, there you have it. If you are making vessels for food, Japanese law requires that they be food safe according to ISO standards. That sounds fair to me.
Posted by Euan Craig at 12:07 No comments: 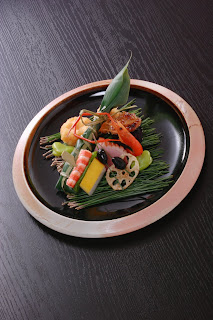 My friend and fellow deshi of Shimaoka sensei asked me an interesting question the other day.

"How do you keep your black glaze black in a Soda Firing?"

There are indeed lots of ways of getting a black glaze, but you have to decide what kind of black you want. Many black glazes use an overcharge of several colouring oxides to give a dense black. In my case, I am looking for the warm translucency one finds in lacquer ware. Lacquer is in fact brown, but layer upon layer make it so dense it appears black.

In order to achieve a similar brown based black I turned to the Tenmoku style iron glaze. The base glaze is clear, using only four ingredients; Feldspar, Silica, Whiting, Kaolin. To this I add FeO, or Black Iron Oxide.

Using Black Iron Oxide gives you a head start, as the Iron is already reduced. Using Red Iron Oxide, Fe2O3, will require more work to get rid of the unnecessary oxygen.

There are a plethora of glaze recipes available which are excellent Tenmoku in a gas kiln.


Within any plant there are minerals which have been drawn from the ground, and when burnt these minerals either become gaseous and volatise off into the atmosphere or remain as a solid residue, ash. When firing a wood kiln the gaseous minerals, like sodium, will flow through the kiln with the flame and exhaust gases, combining where it contacts with free silica in the clay or glaze surface to form a soda glass glaze. Ash is blown into the kiln with the flame as a powder, settling on the pottery and glaze, adding a coating of a variety of minerals depending on the plant. At a high enough temperature, usually about 1300 centigrade, these minerals, silica and fluxes, will melt and form a glass coating all on their own. The colour and surface will be affected also by what minerals are contained in the vessel surface and mix into the glaze matrix. At the end of my wood firing I also add some Soda Ash , NaCO3, which becomes a gaseous flux inside the kiln in the same way as the natural vapours from the wood. 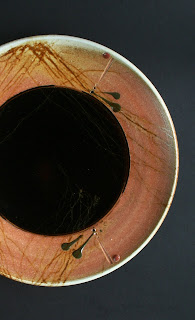 So, in a wood and soda firing the glaze gets watered down. The ash adds an extra wash of relatively clear glaze and the gaseous flux Sodium makes the glaze melt even more. You end up with a variety of oatmeal and honey glazes. You can see how the "hidasuki" markings from the "Igusa" straw have left golden veins in the black glaze on this plate. Too much straw and it all turns to golden toffee. That can be nice, but it's not black, and it might not be what you want.

So, you need to make the glaze harder, so that it is a bit short of flux and a bit resistant to soda, raising its melting point. By reducing the Feldspar, for example, it raises the melting point, but also raises the ratio of Iron in the glaze. Iron is resistant to soda. Effectively you adjust the glaze recipe to make allowance for the extra flux which is floating around as a gas in the kiln atmosphere. 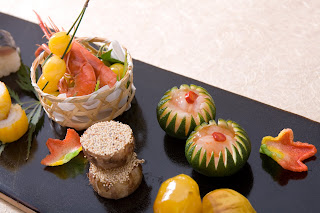 Glaze application is also important, as no matter how good your glaze is, if it is too thin the ash and soda are going to win. I apply my glaze at a viscosity of 60 by the hydrometer. Tenmoku is very sensitive to variations in texture underneath, so also be aware that the finished glaze surface and colour are only as good as the finished surface of the vessel.

It has taken me years to get my clay body, glaze recipe, glaze application and firing right, and all of those variables affect the finished result. The same glaze will be different in a different firing or on different clay, so it is necessary to experiment with your own materials and firing. In the end it becomes another inimitable expression of your own aesthetic. Hopefully these principles will help you along the way.
Posted by Euan Craig at 11:04 1 comment: 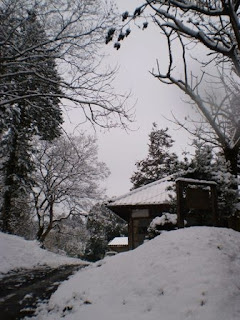 Home. After a week in Tokyo I am home. My return was delayed by a late fall of snow on Tuesday night. My friends asked me to stay an extra night rather than driving through a worsening blizzard on dark, icy roads, and I thank them for their kindness and hospitality. The snow had turned to rain by yesterday, and the grey sludge that had made Tokyo's roads so dangerous the night before had washed away without a trace. The congested traffic thinned gradually as I headed out of the city, north into the country. The houses became sparser, replaced by fallow fields not yet sown for spring and an ever increasing number of trees. There was still snow on the ground when I got home, though a drizzle of rain was making it thin. Mika came out to greet me as I pulled into the driveway. The kitchen was warm from the wood stove and by the time the kids came home from school it was snowing lightly again. Home. 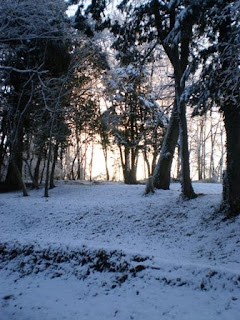 This morning the sun rose through the snow covered trees in front of the house. As I went out onto the front veranda to feed the cats, I startled a family of pheasants that had been scratching in our compost heap and they scattered noisily into the bamboo. When I returned to the kitchen the children were busily preparing for school while Mika readied breakfast. We all sat down and enjoyed our morning meal together before they hurried off to join their friends. When Mika returned from taking Sean to preschool we had a cup of drip filter coffee and chatted while I signed wooden boxes. We made a delivery of beer cups and tea bowls to a gallery in Utsunomiya during the day and by the time we returned home it was quite warm out side. We sat on the bench in front of the house and enjoyed the sun for a while. 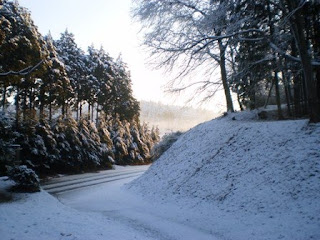 The exhibition went very well this year, better for me than last year, and I thank my friends and clients for making it so successful. I am, however, glad to be home, away from the constant buzz of the city, the crowded subways, the grey concrete and black tarmac. I am happy to sit in the sun and listen to the wind in the trees, rather than stand in the windowless, artificial light of the department store and the drone of piped music. To know that what I see is what there is, not just an elegant facade. On breaks from the department store I would walk to Ebiya across the bridge and find calm in that little oasis. In the evenings my friends made me welcome in their home. It helped me through the exhibition. But the city and all its artifice distresses me, and I am glad to be here, in the real world. Home.
Posted by Euan Craig at 15:42 2 comments: 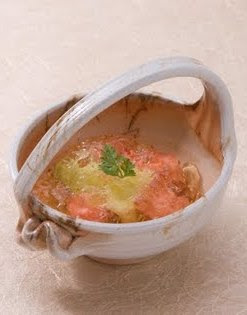 Today sees the start of an exhibition at Takashimaya department store in Nihombashi, Tokyo.
Myself, Penny Simpson and Peter Seabridge are holding our second exhibition in the 7th floor Kougei Gallery, and we will be there every day till Tuesday the 9th. For several years we exhibited together at the Tokyo Dome Tableware Festival, but from last year Takashimaya has hosted our show.

The timing of the exhibition also coincides with the restaurant G'Drop winter menu which features my vessels. So, if you're in Tokyo over the next week, drop by and see us!
Posted by Euan Craig at 07:33 No comments: