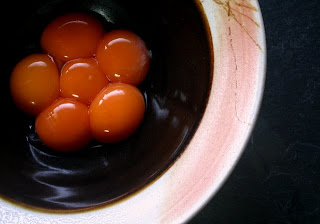 Advanced skills are elementary skills, just as the greatest joys are the simplest ones. During my many discussions with my friend Hashimoto Touru about Japanese cuisine, he has pointed out that the high art of Japanese Kaiseki cuisine is based on good old fashioned home cooking. Food was prepared to be served to the master of the house and guests, and certain homes became renowned for their hospitality. As more guests came to these homes with gifts, these homes became more prepared for greeting those guests, and so in time places which specialised in hospitality emerged. That is the root of the hospitality industry, and I think that holds true in any culture.

Pottery emerged in a similar fashion from the need for vessels in the home in ancient times, and as different families began to specialize in particular trades, so too pottery became a profession. Perhaps not the oldest, but fairly close! 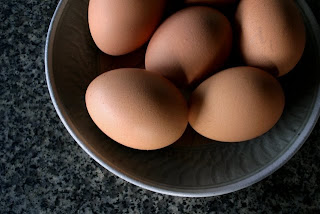 I began potting when I was about 14, working part time in studios near my home. Even then functional pottery was what I wanted most to do, and it was the lifestyle and the humanistic nature of the art that interested me most. When I was young I found myself in a position where I needed to question conventional values and find answers that would help me achieve my potential. Pottery allowed me to explore art, science and philosophy, while building my physical strength and dexterity, all in collaboration with the basic forces of nature, and then to give that a form that was beautiful and functional, communicating my feelings to others in an intimate way. It is a career that continues to be challenging and from which I will never retire, and the pots that I make will hopefully bring joy to generations to come.

I have been working with chefs since the '90s, and it began with my desire for my pots to be used and to improve the quality and practicality of my work. In order to make good pots one must know how to use them, so I have always enjoyed cooking and serving food on my work. I am not, however a professional chef, and felt that I needed the input of a professional chef. I also needed to "test drive" the results, so the collaborations began. I love the process of making and firing the work, the preparation and serving of the food, and the ultimate enjoyment of sharing a meal with those I love. 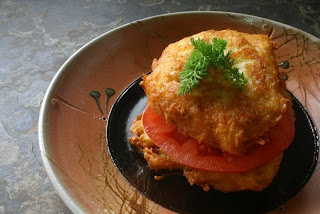 There have been many challenges along the way, not the least of which has been trying to gain the understanding both of the public and my family and friends that pottery is an Art and a Career, not just a glorified hobby. Working with chefs and sharing my vessels in a restaurant atmosphere has been a wonderful opportunity to help that understanding, and the photographs of the work with food have helped to communicate that idea. However, I started to find people saying that the food they cook at home could not do justice to the pottery, and was incomparable to the cuisine served by professional chefs. 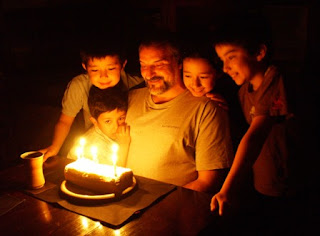 Which brings me back to my original point, that even the best of cuisine is based on the simplest of origins; enjoying food in the home with the people you love. One of my favourite meals in all the world is a simple dish that my Mum used to make called Mock Fish. It is made from potatoes mainly, and I have memories of Mum making batch after batch while my brothers and I devoured them with lashings of tomato relish. So when a friend brought me some home grown spuds, onions and tomatoes the other day, and eggs were cheap, I cooked up a batch, and served them with a sprig of dill from the garden. I took a photo of it and that has been at the top of my blog ever since. The simplest of foods, served in the simplest of ways, on hand crafted vessels, enjoyed with the people you love. What could be more nourishing for the body and the spirit?

Add the ingredients to a large bowl in the order shown, and mix each potato into the mixture as it is grated. This will avoid the potato oxidizing and turning brown. When thoroughly mixed, fry 100ml dollops of mixture on medium heat for three minutes each side till golden brown. Serve as shown in the photo, sandwiched with a slice of fresh tomato and a sprig of fennel, or with lashings of tomato relish. They're really nice cold too!

Just as in English there is a whole vocabulary available for the discussion of Art and Beauty, so too does such a vocabulary exist in Japanese. There is a tendency among people with a passion for and some experience in Japanese art to use the word “Wabi sabi”, and yet so little understanding of what the term refers to. Leonardo da Vinci said that, “If you cannot explain something, you don’t understand it.” To be anecdotal for a moment, there was one young American anthropologist who had studied pottery briefly in Mashiko, who gave a slide lecture here to coincide with an exhibition of American ceramics. Anything in his slides which seemed even vaguely Japanese influenced he described as possessing “Wabi sabi”. One of the thirty or so professional Japanese potters in the audience enquired, “What do you mean by Wabi sabi?” He laughed as he responded, “Nobody knows what Wabi sabi means!” The entire audience laughed also, but the young gentleman never realized that it was not because they agreed with him, but because of his naivety. Wabi sabi is not some mystical secret, but a basic aesthetic principal. Merely because he didn’t understand it doesn’t mean that it cannot be understood.

Historically “Wabi sabi” was first coined by Sen Rikyu, the founder of the Japanese tea ceremony. Tea was used as a political tool at that time, and the Daimyou, Toyotomi Hideyoshi, often invited political opponents to enjoy tea with him. The sheer richness and lavishness of his style of tea were designed to impress and intimidate. In contrast to this Sen Rikyu proposed a style of tea which was about simplicity and minimalism. Essentially the tea ceremony is about enjoying a nice cup of tea, with all of the five senses. The word for “Delicious” in Japanese is “Oishii” which literally translates as “Beautiful flavour”. So, tea was about beauty. Beauty of sound, of touch, of taste, of fragrance, of vision. If all five senses are to be involved then it is imperative to control the environment in which the ceremony takes place, hence the birth of the tea house and garden. For Sen Rikyu, beauty was not about lavishness. What he proposed was that by eliminating all of the extraneous clutter it was possible to appreciate the essential quality of beauty.

Etymologically, “Wabi sabi” is based on the root forms of two adjectives, both of which are generally translated as “Lonely”. “Wabishii” however focuses on the object which is lonely, where as “Sabishii” focuses on the absence which makes the object lonely. The principal of “Wabi sabi” is therefore; Beauty reduced to its simplest form, and that form brought to a peak of focus by its relationship with the space in which it exists. That is to say, the presence of an object and the presence of the space interacting to strengthen each other.

The idea that space has presence is not new. Two and a half thousand years ago the Greek philosopher Parmenides proposed that it is impossible for anything which exists to conceive of anything which does not exist and that therefore even the space between objects “exists”. This remains in modern English as the concept that “I have nothing”. In Japanese however, it is grammatically impossible for “Nothing” (Nanimo) to exist (aru). “Nothing” (Nanimo) must be followed by “Is not” (nai). The idea of the presence of a space was therefore revolutionary.

To take it one step further, a tea bowl, being a vessel, is defined by the space it contains. It is not the pot which is important, but the space. In the tea bowl it is therefore possible to have the object (Wabi) and the space (Sabi) interacting within the same pot.

There is a story about Sen Rikyu having a hedge of Morning glory planted in his tea garden, and Toyotomi Hideyoshi was to enjoy the tea ceremony when it blossomed. On the morning of the ceremony, the hedge was in full bloom, a swathe of pink flowers. Sen Rikyu came along and clipped off every flower, saving only the single most perfect blossom, which he displayed in the tea house. Had he left the flowers as they were this single blossom would have been lost in the crowd. In the space of the tea house, however, it was beautiful beyond compare. That is the essence of “Wabi sabi”.

Toyotomi Hideyoshi was apparently extremely angry, and it is interesting to note that shortly afterward Sen Rikyu was forced to commit “Seppuku” suicide.

The long and the short of it is that “Wabi sabi” is about simplifying the beauty of nature to its essential elements, and the vitality brought to that beauty by the mutual interaction of object and space, even within the same object. That which is not there is just as important as that which is. This concept has pervaded the Japanese aesthetic and is not confined to pottery, but can be found in any art, including literature and cuisine. It does not exist in every piece of art work, though, and care should be taken in using the term appropriately. It does not mean somber, that would be “Shibui”, nor calm, that would be “Ochitsuita”. There is a whole vocabulary in Japanese to describe art and beauty, just as there is in English. Perhaps we would be wise to use the one we understand the best.

Trees are generally beautiful, but a leaf is beautiful in a very specific way. Having a thousand leaves does not make a tree a thousand times more beautiful than a single leaf.