The undulating ceiling of clouds catches on the peaks of the mountains, their ragged edges swirling into the valleys and tangling in the trees. And as those fragments disperse into the air, I can feel the misty droplets kissing my face as my feet carry me up the valley on the homeward leg of my morning walk. I muse that I am like a fish looking up through murky waters at shipwrecked sails being torn upon a reef.

Strange how often we use analogy to try to explain the world. Of course, any description of our experience of the world will be less than the experience itself, but we try to evoke images in the minds of others with analogies which only take them one step further away from the truth. I have often heard people describe a sunset as “looking like a painting”. But I think it should the other way around. That there are paintings which look like sunsets. I have seen paintings of sunsets, some of which are incredibly beautiful, and though those art works may say something else, about the feelings of the artist, or the nature of the medium, I also know that there is no painting, nor photo, nor cinematographic representation of a sunset which compares in breadth, depth or detail to the full sensory experience of an actual sunset. Or a flower. Or a coffee mug. As I enter the back garden gate and bow to the Inari shrine as I pass, I take a mental note that the bamboo shoots are coming up, in and around the grove, and need to be harvested before they get too big. I come in quietly through the studio door, trying not to wake the family. The two cats sneak past me eagerly, looking first to me and then the kitchen door expectantly, urgently mewling breakfast requests. 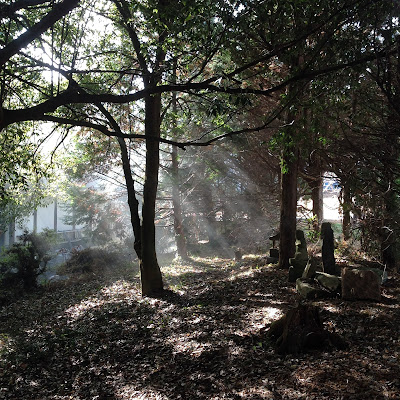 “Cornflakes?” I enquire to them. I interpret their answering “Meow” as an emphatic “Yes!”, and give them each a bowl of dry cat kibble. The analog clock on the wall insists that it is a quarter to six.

Isn’t it interesting how language evolves? Somehow “Analog” has come to mean “As opposed to Digital”, and seems to equate to anything of a manual or physical nature. I have often been described in recent years as “analog”, along with my work process, lifestyle and general values. But I’m not sure that is the right word, and it somehow implies that I am some kind of anachronistic Luddite, out of step with the “Real” world. To the contrary, I have striven to pare off the artificial and the arbitrary in order to live a simpler, more practical and sustainable life, in line with the realities of our era.

An “Analog Clock” is not named because of its mechanical, physical nature, but because the movements of it’s hands are “Analogous” to the movement of the sun’s shadow on a Sundial. Of course, the shadow only moves between dawn and dusk, and the ancients divided the movement of the shadow into twelve equal parts, an inheritance from the ancient Babylonian’s arbitrary predilection for base twelve. Which, incidentally, is the same reason that there are 360 degrees in a circle, and sixty minutes in an hour, and sixty seconds in a minute. Dividing the night time into twelve, and making all the twenty-four hours equal in duration came much later. It ignored the fact that periods of daylight vary in length depending on where the planet is on it’s endless journey, a little droplet teeming with life, rotating on it’s axis, wobbling it’s roughly elliptical orbit in the goldilocks zone around it’s local star, in this vast and barren galactic desert. It also ignored the fact that, like every other living thing that exists on earth, we evolved to dance in rhythm with this endless symphony of light and dark. Then they divided the world into twenty-four time zones, so that we could all ignore the actual movement of the sun together. And, just so that there is no misunderstanding, a second is now the base unit of time, and is defined thus:

“the unperturbed ground-state hyperfine transition frequency of the caesium 133 atom, to be 9192631770 when expressed in the unit Hz, which is equal to s−1.”

Don’t get me wrong, I understand the importance of accuracy, and science is another way of exploring and understanding the universe. I marvel at the wonders which science discloses of both the macro and microcosm, and the miracles performed for the benefit of humankind. But not all of those discoveries are beneficial, and the choice of how, when and whether to use them cannot be taken lightly, and they should never be swallowed whole without due consideration of their consequences. Just as tradition must be constantly questioned and reviewed, rejected or reinvented where necessary, as many evils have been perpetuated in traditions's name.

For my part, I haven’t used an alarm clock or a wrist watch, neither analog, digital nor atomic, for many, many years. The role of the clock on my wall is only to synchronise with the rest of society, as is the calendar. There is much of modern society which not only ignores but is detrimental to nature, both in the sense of our global environment and in terms of our own human nature, our physical and emotional health. And life is too short and too precious to waste on arbitrary nonsense. So please forgive me if I choose not to invest my life too deeply in popular trends and artifice, because it is a matter of life and death for me, and I am no crazier than the lonely lemming who questions common conventions and popular culture and, after due consideration, says, “No, thank you all the same, but I don’t want to go that way!”. 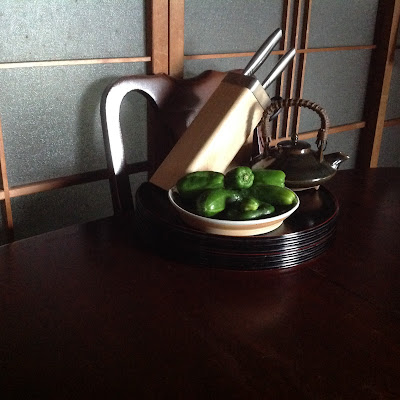 I awoke at dawn and went for a walk around the village, and arrived home in time to make Obento lunch boxes and breakfast for the family. And off they went, to work and to school. Now that I have cleaned the kitchen, put away the dishes, and the futons, and written this letter to you, I shall turn off the digital world, go out to the studio and make some actual pots. Not analogies. Pots that aren’t canvasses but are art works in and of themselves, explorations of the materials and their interaction with natural forces. Pots that tell a story of their making and my understanding of the beauty of nature. Pots that will become part of other peoples lives, a conversation about the beauty of living every day. Pots that will continue to speak their truth for generations after I am gone and forgotten, another unknown craftsman. Bowls, perhaps, or plates. Or coffee mugs. While I sit in the light from the window, kicking the wooden wheel, with my hands in the earth and the water, listening to the long whistling cry of hawks... the twitter of sparrows... the croaking of frogs in the rice paddies...and the buzz and ringing chimes of cicadas in the trees, I will ponder the difference between the actual and the arbitrary, and the folly of convincing oneself that the arbitrary is absolute.