The Word about Pottery and Food in Japan 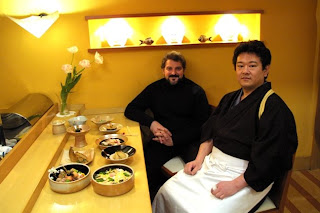 Over the last few years my collaborations with chefs has raised a lot of interest in the ceramics community both here in Japan and overseas. My greatest ally in these endeavours has of course been Touru Hashimoto from Toyoda in Nihombashi. I have gained invaluable insight into Japanese cuisine and culinary aesthetics through our friendship and have been able to share some of those experiences with many people all over the world. It also seems to have opened a few eyes here in Japan. 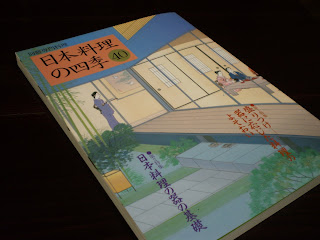 I received a copy of "The Four Seasons of Japanese Cuisine" (Nihon ryouri no shiki) which was officially released today. The monthly magazine for professional Japanese chefs produces this annual book every Spring. In this Issue, No.40, there is a five page article on Hashimoto san and my collaboration. It seems that this kind of collaboration has never been done before. 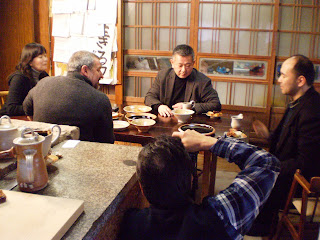 They came here to my pottery to do the interview with us, and the article is fantastic. If not before, then most certainly now, my work has been accepted by the professional Japanese culinary community. Hooray!
Also today the Nikkei BP website has launched the first half of a two part documentary on me and my work as part of a series entitled "Foreigners who inherit the Japanese Tradition" (Nihon no dentou wo tsugu gaikokujintachi).
I will always be Australian, but there is a commonality between human values that transcends nationality. I believe it is that common ground underlying traditional cultures that the Japanese community is recognising in my work now. Regardless of my country of birth, this is my home.
Posted by Euan Craig at 20:47 No comments:

The Principles of Shino

Over the past few weeks I have been asked by several potter friends about the materials for Japanese shino glazes and their equivalents in the west. I haven't actually used a shino glaze for about fifteen years, but with some of the restaurant collaborations and requests from chefs, I may soon be revisiting the shino arena.

It is probably useful to firstly put shino into a frame of reference.

Once upon a time there was a tea master named Shino Soushin (1444-1523) who directed that the potters of Mino produce a white glaze. Their solution was to coat a low iron clay, either mogusa clay or gotomaki clay, with a local feldspar, occasionally mixed with some clay to make it more user friendly. The resulting glaze, wood fired of course, tended to be slightly grey in oxidation (Nezumi Shino meaning Mouse Shino) or pearly white with red flashing in reduction.
Generally Shino glaze is accredited to the Momoyama period (1568-1600), and, yes, some of the finest shino glazes come from that period, but it had its roots in the Muromachi period (1336-1573). Interesting to note the overlap.

So...what was the feldspar?!

The simple answer is Hiratsu Shino Choseki. Choseki is Feldspar, the Kanji "長石" means "long rock" referring to the rhombic crystalline structure of feldspar. This feldspar has a high Alumina to Silica ratio, combined with fairly high Sodium/Potassium content. It is in fact the Sodium and Alumina under reduction that give the distinctive soft pink and orange flashing of Shino. Which is why Nepheline Syenite lends itself so well to shino style glazes. Compare the analyses;

Many recipes have been based on this material, especially with its high sodium content. With the addition of up to 40% Clay (Ball clay, Kaolin, Porcelain, Terracotta or Fire clay) a huge range of variations can be achieved.

The representative Ball clays added to the feldspar in Japan were either Gairome;

Other recipes have taken note of the high alumina to silica and high Alkaline flux and have included Soda ash into the mix. Others depend on fluxes other than Soda, the most significant being Lithium. In the west many Shino glazes use Spodumene as the base, which is basically;

This is as rare as hens teeth in Japan, and the best replacement is Petalite;

Of course the Silica present in the rest of the glaze needs to be reduced to compensate. This can sometimes be done by replacing Kaolin for Ball Clay, but it is important to test with the materials one has at hand, as there are huge regional variations. Alternatively an addition of Lithium Carbonate and Alumina will compensate, but you will need to do the math!

It is this high alumina, high alkaline flux that gives my pottery its distinctive peach blush, as I am using a porcelaineous, high alumina, low iron, clay in a wood firing, from which the natural salts vaporise from the wood, with the addition of a small amount of soda ash at the end of the firing. Not Shino, but based on the same principles.

There are books that purport to tell the secrets of Japanese wood firing, with lists of "American" shino recipes and no examples of any actual representative Japanese ceramics whatsoever. OK, I can live with that. As recipes they stay within the parameters of the original Hiratsu Shino style, and if you are satisfied with that, fine.

But that is NOT all, oh no that is not ALL!

Japanese shino glazes are not all made with Hiratsu Shino Choseki, and not all flashing is Soda/Alumina. One must not forget our old friend Iron, who so happily serves the potter with a huge gamut of glaze effects.

As my sempai Ken Matsuzaki demonstrates so well, any feldspar can make a Shino, given the presence of Iron either underneath the glaze or within range of the external glaze surface. It is the nature of Iron oxide that in a heavy reduction atmosphere, between the temperatures of 1090 and 1130, over an extended period of time, it will volatise and migrate to the surface of the glaze. This must be done before the glaze cinters, sealing it and preventing the Iron from seeping through the porous glaze matrix. By painting a decoration in Iron under the glaze, or by utilizing a small amount of Iron in or on the body beneath the glaze an Iron blush can be created on the opalescent white feldspathic glaze. A wash of Iron inside a saggar surrounding the work can give a similar effect.

Maintaining a heavy reduction during cooling is essential, but in the end the micro fine layer of Iron will re oxidize to give the distinctive Shino blush. Merely seeing Iron through a semi transparent glaze is not Shino. There is a lustre and warmth that springs from the natural process which makes shino special. Colours that resonate with sunrises and sunsets, that remind us of the soft warmth of human skin.

The Japanese traditional teaching system does not put the onus on the teacher to teach; It is the responsibility of the student to actively learn. Shimaoka sensei told me that there are no secrets. You just need to ask the right questions.
Posted by Euan Craig at 22:54 24 comments: 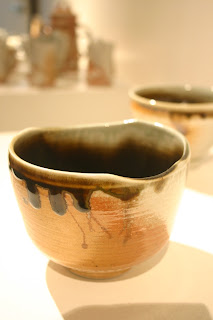 Being busy is a good thing, but even I have limits. Since my last entry I have had a successful three person exhibition at Takashimaya department store in Nihombashi, Tokyo, with Penny Simpson and Peter Seabridge; A three day workshop for the International School of the Sacred Heart; Completed the order for G'drop and I am right now in the middle of a solo exhibition at the Kyohan 6 Gallery in Mashiko. So please forgive me for the extended silence! 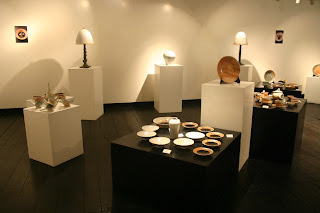 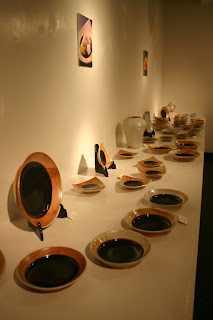 The Gallery is directed by Ikuzo Fujiwara, an exceptional architectural ceramicist and sculptor who studied at the Kawai pottery in Kyoto. I knew that he was going to write a comment for the invitation card, but did not see it until the cards actually arrived. Here is the translation. 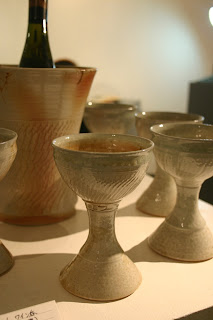 Quite some time has passed since I visited his studio and he showed me the kiln that he developed.
Very efficient, burning only recycled wood, these days it would be referred to as an “Eco-Kiln”. I was impressed by his ingeniously considered solutions, his uniquely rational way of reforming anything into a personal method. 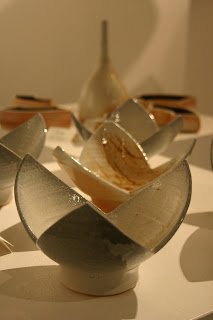 His approach to “The Art of Function” is also unique. What kind of food will be served on his vessels? How his works will be coordinated as tableware? He takes steps to address these issues, to make work to fulfil those purposes and achieves a degree of total design that a potter would not normally undertake. 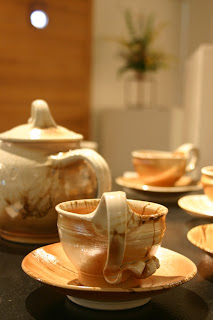 Vessels that come to life through the act of use; what simple and powerful works these are.
And yet, not stopping there, he turns “The Art of Function” into “The Function of Art”, striving to change the Art of Function into an even more positive force. A fine example of this is the unique flame colour of his work. His original porcelaineous body brings with it the warm flavour of clay. 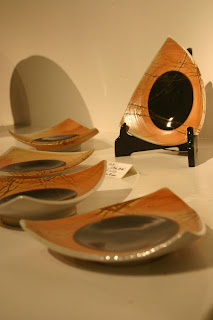 By taking that extra step, his work holds the power to alter peoples’ lifestyles. This is what I would hope is the essence of the art of function. When one thinks of “Mingei” in global terms, it can be said that his stance is pointing a way forward for the inheritance of “mingei” in the modern age.
By all means, I invite you to consider his work. 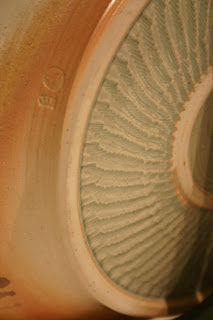 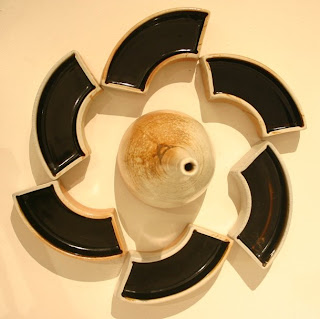 This is my twentieth year in Mashiko, and I came here with a hunger to learn and understand the Japanese tradition. I have learnt a great deal about myself in that time, and have come to understand that there are commonalities that we all share as humans that transcend race or culture. I am honoured to have been accepted here in the home of Mingei, not as a guest, but as a fellow craftsman.
Posted by Euan Craig at 20:46 No comments: