NHK World, the international branch of the Japanese National Broadcasting Commission, recently spent four and a half days filming the first firing in my new kiln. Part of the "BEGIN Japanology" programs "Japanophiles" series, the 30 minute documentary goes to air globally on Thursday the 30th of August. It will be broadcast on NHK BS1 at 2:00pm Japan time, as well as six broadcasts at four hour intervals on NHK WORLD online. You will need to check the broadcast time in your time zone. 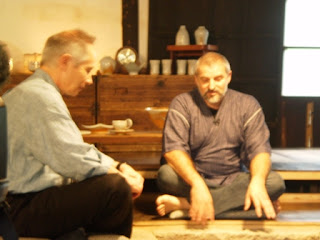 "Hosted by Peter Barakan, BEGIN Japanology invites you into the world of Japanese culture, both traditional and modern, explaining how traditions evolved and the part they still play today in people's everyday lives." 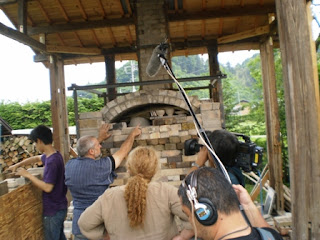 Whether by accident or fate, I will never know, but the director of the program from NHK contacted me out of the blue less than a week before my first test firing. The film crew were all fantastic people, and it was a real joy to share this landmark firing with them. During the filming we had old friends from Australia visit, as well as the locals who have welcomed us so warmly into this community. Of course, Raku and Hiroko Watari came to help, and it was a great conclusion to his gap year before starting his studies at MIT. From repairing floors, building the shed and the kiln; through the dead of winter and -13C to the triumph of this firing and 1305C, we shared an experience of rebirth that was rare and very precious. If nothing else, this program documents the culmination of our struggle, and I am very grateful to the staff at NHK for making it a reality. 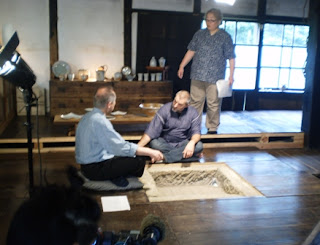 I admit to stage fright when faced with the interview during the program! Having a film crew following me through my work process is one thing, but a one on one interview in front of the camera is quite another. The host of the program, Peter Barakan, turned out to be a very charming and sensitive gentleman, and he guided me through the interview with professional grace. It was a great pleasure sitting by the irori in the studio sharing tea with him in vessels from the very first firing in the new kiln!

We have come so far in such a short time, and owe much gratitude to all of you out there who have helped us. I hope that you can find the time to watch this program and see the fruition of all our efforts.
Posted by Euan Craig at 17:22 14 comments: