It is interesting to note that the Lava flowing from the volcano in Hawaii has a temperature of about 1200 degrees centigrade, whereas the temperature inside my wood fired kiln is 1300 c. Effectively I have a man made volcano in my back yard. (Photo; Sakurai Mitsuyo/桜井光代)


It isn't really such a strange thought. The glazes which I apply to my pots are mixtures of powdered minerals, rocks if you like, which I am trying to melt into a glass. The last time they were molten was when they were either lava or magma, so it stands to reason that the temperature which I need to achieve should be the same. Hotter in fact because I am trying to achieve geological effects in human time scales. 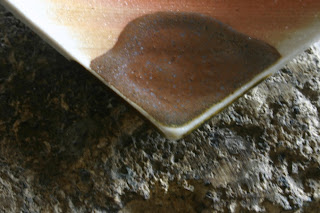 In this last firing I included some rock glaze tests. The traditional Mashiko Kaki glaze is made from the powder of one rock, a local stone formed from volcanic ash called "Ashinuma Ishi". Ashinuma, where it comes from is a five minute walk up the road, and many of the storehouses and building foundations in this area were built from this stone, including our house and the shed which burnt down. A mashiko potter many years ago used some of this rock to close his kilns firemouth after a firing, and when he opened the kiln the rock had fluxed into a beautiful iron rust glaze. It wasn't long before it became the signature mashiko glaze, and because of its similarity in colour and surface to the seeds of the persimmon, it was dubbed "Kaki" glaze by Hamada. It is no longer being mined, and the Mashiko cooperative will only sell the remaining reserves to members. HOWEVER....as I just mentioned, the foundations of the shed which burnt down were built from this stone. One wonders how much of this glaze would be used in one potters lifetime. I put a sample into the kiln as a control, which you can see here. It is usually applied over a "Nami jiro" standard white glaze, but I have applied it over my porcelain clay.

The question which I ask myself is, Does tradition lie in the materials and tools which are used or in the spirit in which they are used? Every tradition has at some point started as a cutting edge development, the repetition of which over generations becomes "Tradition" with a capital "T". The risk is that subsequent generations will make copies of old works which are no longer appropriate in a contemporary context, anachronisms which lack the spirit and relevance of the original works. If the tradition lies in the spirit of the process, the use of natural local materials which are inexpensive and readily available, to create work which is relevent to the society in which it is made, then change itself becomes tradition. What we consider local now, places we can flit to within the hour, may have been days of travel away a century ago. And so I have begun to experiment with some different "local" materials. 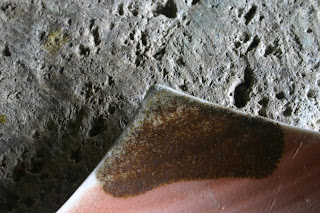 Just on the other side of Utsunomiya, the prefectural capital, about 40km from here, is a place called Oya. Oya stone, a vesicular stone once again formed from volcanic ash, has been quarried for centuries for building purposes throughout Japan, particularly the Kanto area. It is hugely abundant, far more so than Ashinuma stone, and is easily worked with hand tools, being light and porous. It is sawn into blocks, and the dust from the sawing process is freely available. When you mix the dust with water, apply it to a pot and fire it to 1300 it looks like this. 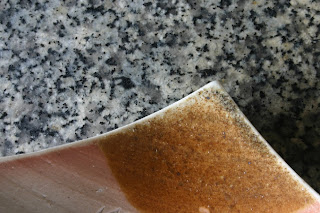 To the south of Mashiko in the neighbouring prefecture there are large deposits of Granodiorite in Iwase and Makabe. This is a much harder rock, very much like granite, but it contains a plagioclase (sodium) feldspar rather than an orthoclase (potassium) feldspar. It also contains quartz and muscovite and has a large crystalline structure. It cooled slowly underground which allowed the different minerals to separate and crystalize independently, giving it a distinctive appearance. The dust from these quarries is also cheap or free and there are mountains of the stuff. It looks like this. (You may notice that nature has left the message "CRAP" in black muscovite flakes in the left corner of the picture, this has not been tampered with!) The glaze is a smooth transparent toffee type glaze, similar to traditional "Ame".

I don't know whether I will ever use these glazes, but the point is that they are there. Simple, inexpensive and functional. Similar materials are available virtually anywhere in the world, probably around the corner from you, just waiting for a potter with a personal volcano to bring out the best in them.
Posted by Euan Craig at 21:36 No comments: