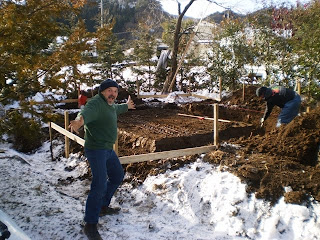 YES! We have begun the foundations for the kiln shed and kiln! Now that the family are truly safe and settling into our own home, I can start the task of getting my work back on track. It is, of course, the firing of the kiln that finally defines the potter. So, after ten months in limbo, the joyous rebuilding begins! 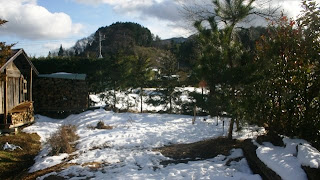 In the corner of the front yard, behind the existing shed (which is currently home to a bevvy of cats) and at the end of the driveway, is a triangular space begging to be used. It is away from the house, which is important for fire safety, but much closer to the studio than my kiln was in Mashiko. It was always a challenge carrying pots to the kiln during rain, as my vessels are glazed raw and even one drop of rain can cause the glaze to crawl. During the four months of winter here the issue will be snow, which is unfamiliar territory for me. The first time I saw snow was the day I arrived in Japan, 22 years ago next week, and even in Mashiko we only had two or three snowfalls on average each year. It has been snowing to a greater or lesser degree every day here since Christmas, and I am told to expect at least a metre of snow by February. The children have been having snow ball fights and building snowmen and igloos to their hearts delight, and there is no greater joy than to hear children's laughter echoing through the flurries of snow in the garden. 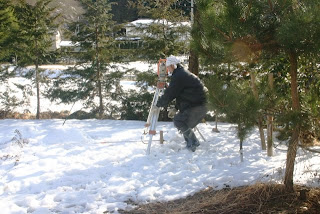 I had arranged for the local contractor, Shimojo san, to start the foundations last month, before the ground froze, but the best laid plans...

As fate would have it, he arrived first thing in the morning on January 11th, and amid light flurries began setting up his theodolite. 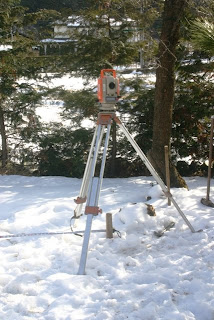 The first day was spent taking levels, setting squares, driving pegs and putting up the outer guide frame. The kiln shed will be 3.6 metres wide by 4.5 metres deep. Once the outer framing was completed, he parked the back hoe ready for work the next day. He assured me that we can complete the job despite the snow, and I must trust him on this as he was born here and knows his craft well. 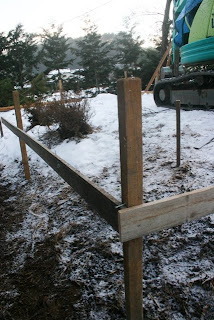 By 6:00AM the dawn lights the sky with amber and gold beyond the mountains to the south east, those mountains we crossed ten months ago, but the sun does not show its face over their peaks till after 7:15 as the kids go off to school. At 8:00AM the work begins in earnest. Excavating with the back hoe to lines drawn in calcium on the snowy ground, it is hard to tell the calcium from the snow! As the sun warms the ground the snow begins to melt. 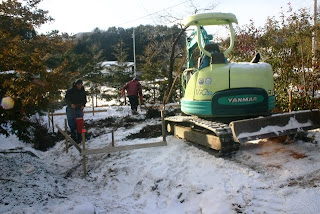 By the time Sean is ready for preschool the main excavations are well underway. I cannot help but dance for joy, and Mika happens to catch a snap shot before I realize I'm being watched! It has begun, after all the trials of last year, it has begun! 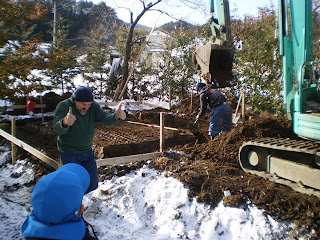 A five centimetre layer of gravel is spread over the foundations next. We use recycled crushed concrete, rather than new gravel. Apart from my stance in terms of recycling for environmental reasons, it's cheaper! The truncated pyramid form of the foundation and the gravel are important for proper drainage. 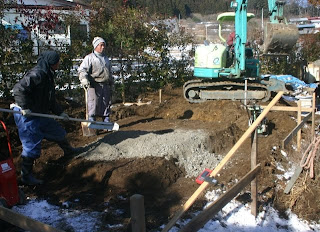 The gravel is compressed and compacted with a vibrating roller, and levels are rechecked. 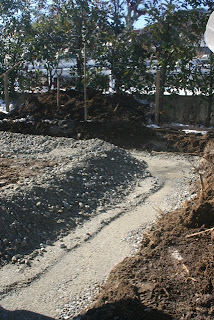 Once compressed, a damp proof sheet is spread over the foundations, and set in place with 5 centimetres of concrete. 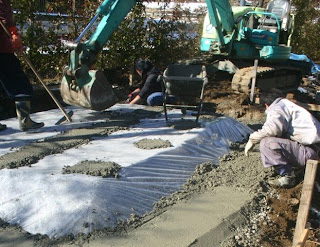 Patches of concrete on top of the damp sheet will act as supports for the steel reinforcing. By 3:45PM the sun vanishes through the trees beyond the ridge to the south west and ice crystals stretch their talons across the puddles from the melted snow in the driveway. Shimojo san covers the foundations with tarpaulins, and assures me it will be OK overnight. 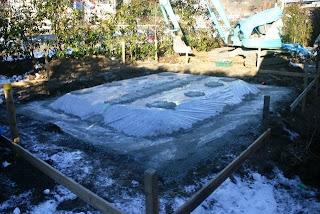 Overnight was minus 11 centigrade, and the tarpaulins are frozen to the surface of the concrete. I wait with baited breath for Shimojo sans arrival. "No problems," he says. "It's perfect." 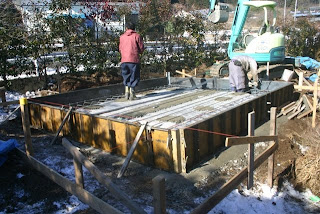 Day 3, today, we frame the outside with the formers for the concrete and set the steel reinforcing. One of the many lessons which I learned from the earthquake was the importance of a strong foundation. That is why I have asked a professional to do the job. 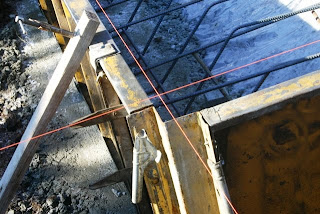 The square and level are checked and double checked. 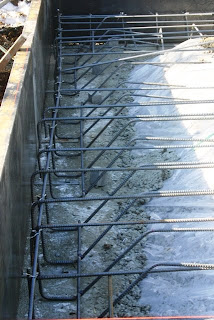 Steel reinforcing rod is set at 20 centimetre intervals. The total weight of the kiln will be about 7 tonnes, and the reinforcing has been calculated to support that weight. Anchor bolts for the kiln shed are welded to the steel reinforcing. The house in Ichikai was not secured to the stone footings, so when the earthquake hit the whole house was shaken from it's foundations. The angle iron frame around the kiln will likewise be anchored to the concrete this time, but those anchor bolts will need to be embedded later. It is important to learn the lessons from our experiences in order build a better future. 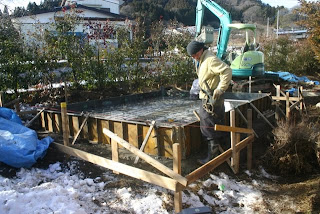 On the level, on the square, framed and reinforced. We will pour the slab on Monday, and it will take at least a week to cure. I hope to begin the kiln shed on the 23rd of January, and build the kiln in February.

My plans, however, are not set in concrete. I take each day as it comes, grateful for my blessings, and I know that I am moving forward. I know how suddenly circumstances can change, and so I hope for a bright future, but I am taking care to build it on a strong foundation.