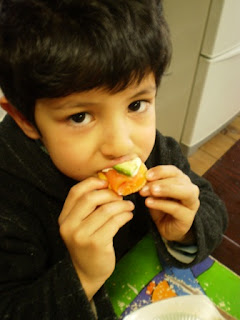 For a number of years when I first came to Japan I would receive a letter from Mum some time in April saying "I thought you would have at least called at Easter." I would then phone to say "When was Easter?" It isn't on any of the calendars here, and as the dates change every year I completely missed it for the greater part of a decade. (The same is true for pancake Tuesday...only more so!) 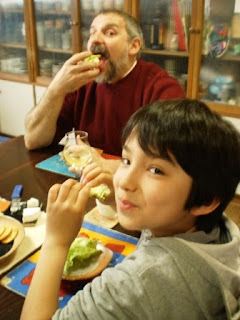 Since the children came on the scene I have been more diligent in searching out the dates each year, and trying to give the kids their share of Australian culture (which does in fact extend beyond yoghurt).
This year is the first time since the children started school that the Japanese spring holidays have coincided with Easter. It has been a conflict trying to get the "Good Friday" holiday idea through to non Christians, and this year, at last, the kids are at home without any negotiations! 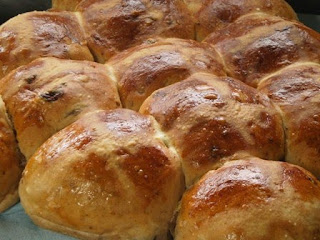 Yesterday Sora and I, with the occasional itinerant help of Sean, Mika, Canaan and the significant absence of Rohan (who was enthralled in a book about another famous Potter), baked five dozen Hot Cross Buns, which should last till Sunday, even in our house! 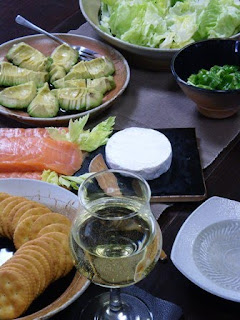 For lunch we enjoyed Norwegian Smoked Salmon, (Thanks Kei!), Mexican Avocados and French Camembert with salad and crackers, with a cheeky Australian chardonnay. A meal to leave a Carbon footprint in the sands of time, but ....it is Easter after all!


This evening we enjoyed exotic Fish and Chips, with beer batter of course, and extra tasting to make sure that the beer was OK. We're still not sure, so the tasting continues.... 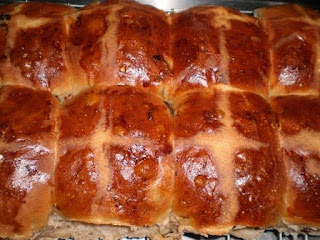 
Mix all ingredients in a bowl in the order listed. Mix thoroughly and then knead for seven minutes (It helps if you are a potter!)

Cover with a damp cloth and raise in a warm place for 30 minutes, or half an hour, which ever comes first, until it is about twice in volume.

Measure the dough into twelve equal balls and arrange on a greased baking tray. Cover with a damp cloth again and raise for a further half to three quarters of an hour until doubled in size.

Brush beaten egg over the buns then drizzle a creamy mixture of plain flour and milk in a cross over the buns. Bake in a preheated oven at 190 degrees Celsius for 25 minutes.

Toast or reheat before serving.

Happy Easter to you all, more news when the bunny arrives!