Back in the kitchen 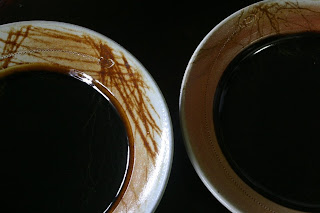 How were the results of the last firing? The colour was excellent and there were very few losses. I was really pleased with the evenness of the firing, with the black glaze coming out amazingly well from top to bottom. These dinner plates were from the top shelf and the bottom shelf. The difference is barely noticable, the edge of the glaze turning amber on the left hand plate. 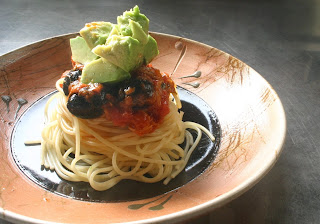 You'll have to wait until I get the photos to see what the chef has done with them, but today was my first chance to try them myself. I always like to test the new work in my own kitchen first, it's the best way to find out the strengths and weaknesses. Lunch today was for three, as Rohan was home from school with a cold, so I tried out three of the new designs. It is interesting to compare the same food on different vessels. For Rohan, who is six, I chose this 7 sun (21cm) plate with slip trailing on the edge. "Sun" (the "u" is pronounced "oo" as in "foot") is the traditional Japanese inch, 3.03cm. Ten "Sun" make One "Shaku", the old Japanese foot. Many Japanese potters, chefs and craftsmen still use the old measurements. 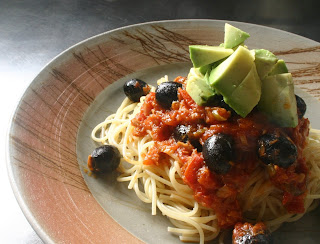 I finely chopped some "Negi" from the garden, which is like a Japanese leek, and lightly fried it with diced celery in extra virgin olive oil. To this I added a small can of tuna and a half glass of light red wine. The wine was made by one of my friends from Yamanashi and he gave it to me at the exhibition opening to bring home to Mika....she let me have half a glass. I served her pasta on a 9 sun (27cm) celadon dinner plate. 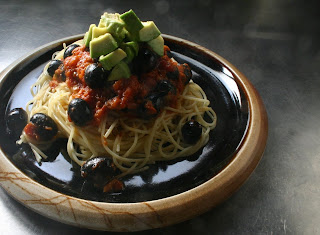 After the wine had reduced to half I added black olives and a can of whole tomatoes, then simmered it down till it thickened. A pinch of salt to finish, then I served it on the pasta with avocado topping. (Avocados were cheap this week, 99 yen each!) My plate was a 9 sun "Hira zara". When we sat down to eat we added some freshly ground black pepper and a sprinkle of Parmesan. I'm not sure which plate worked best with the food, but it all tasted delicious!
Posted by Euan Craig at 20:23 2 comments: 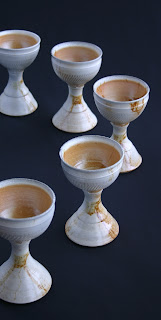 I seem to have magically gone from the middle of a firing to the middle of an exhibition! My solo show at Gallery St Ives started on Saturday and goes until Sunday December 7th. During the exhibition the french bistro three doors from the gallery, Cafe 5 Watts, is serving all of their food on my dishes. The exhibition itself is 260 pieces, and I have provided 100 pieces to the restaurant to use during the exhibition. The pots were designed in collaboration with the owner, Aoki san, and the chef, Motoki san, but they didn't see the actual finished pieces until very late on Friday night! I was quite flustered when I was doing final preparations and forgot to take my camera to Tokyo, so I'll show you the meal when I get the photos from the restaurant.

I finished the last firing on Wednesday of last week and have been so busy since that my blog is still only at 600 degrees! 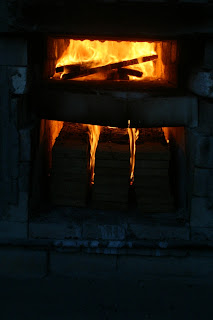 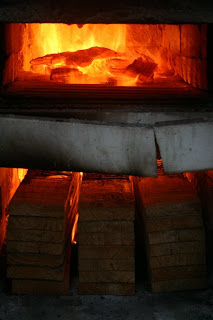 When the wood is exhausted at the top, stoke again. Make sure that you stoke alternately, don't stoke both fire boxes at the same time. While one is freshly stoked and reducing, the other is neutral or oxidizing and giving heat rise. By alternating stokes you can maintain reduction and heat rise. 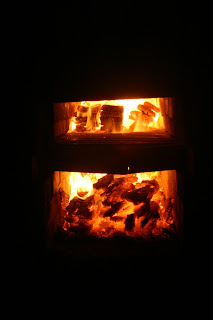 The bottom wood will take about an hour to burn out. 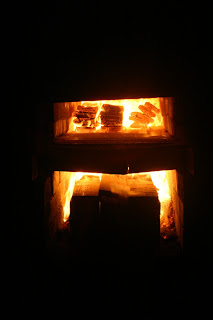 When it does restoke with a fresh bundle. 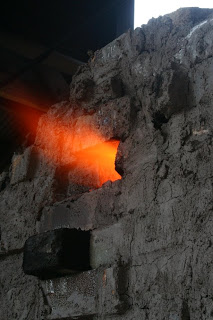 By 900 degrees a reduction flame will come out of the blow hole at the top of the kiln every time you stoke. I generally close the damper down to about half at this point. 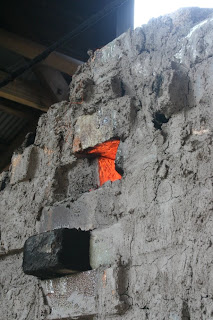 When this flame vanishes it is time to stoke the other fire box. The kiln will be getting hungrier by now and you need to change your stoke.


This wood is thin and has lots of surface area, so continuing to stoke at random will give a heavy reduction but the wood will burn out without recovering any heat rise. To fix this problem I stack the wood in wads of five planks and stoke in three stages; right, left, middle. Once again I alternate stoking time between the two fire boxes. 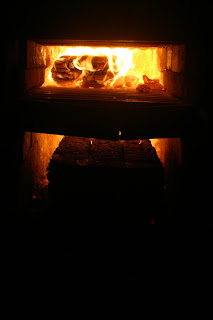 When the right side burns out it looks like this. 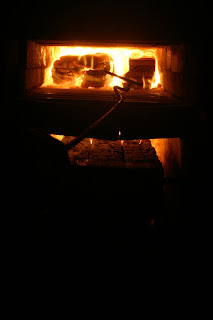 Then I stoke it by placing the wad of wood at the front of the grate and gently pushing it back with a metal rod. 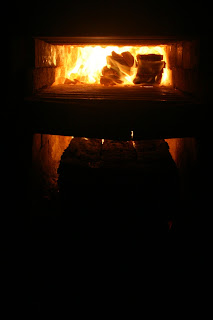 The left side will then burn out. 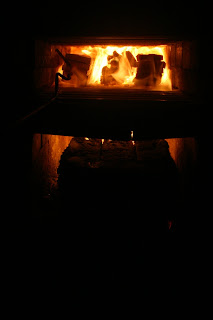 I then stoke it in the same way. 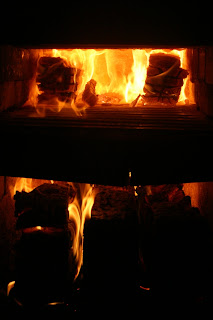 Then the middle will burn out ready to stoke. 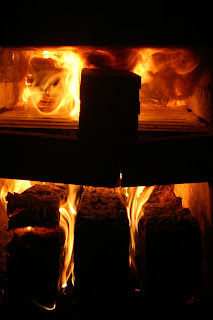 When I saw the photo of stoking the middle, I realized that perhaps I wasn't firing alone after all. I do not know who the face in the flames is on the top left, but the firing was perfect so whoever they are, they're on my side! 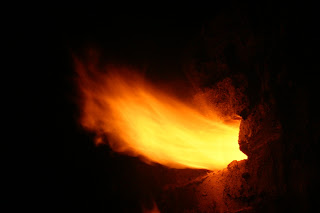 At about 1100 the balance between carbon and oxygen changes. The kiln will reduce heavily with no heat rise, unless you either decrease the carbon by stoking less or increase the oxygen by opening the damper to pull more draft into the kiln. By now you have a very healthy reduction flame blasting out the blow hole. Stoke when it sucks back in and NOT before or you will choke the kiln. 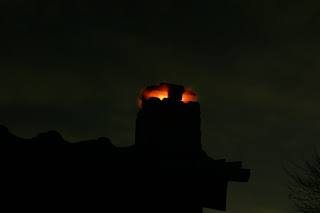 By 1200 + there will be flame coming out of the top of the chimney. 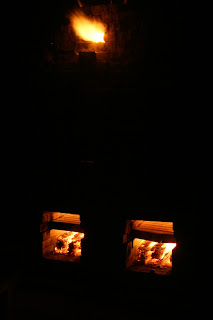 The fireboxes remain open throughout the firing and airflow is controlled by the chimney damper and stoking volume. 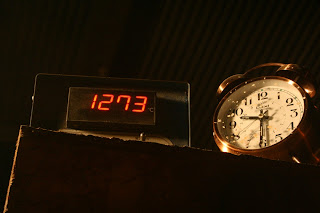 13 hours after I lit the kiln the pyro is reading 1273, but the Seger cone 10 is flat, which means that the heat work is 1300. I let the kiln crash cool down to 1100 then put one last bundle of wood in the bottom on each side and close it up. I unpack 36 hours later when the kiln is below 70 degrees. This firing took 70 bundles of wood at 130yen per bundle.

The pots came out GREAT!
Posted by Euan Craig at 08:45 No comments: