Throwing off the hump is an ancient skill. Most of the techniques used in ceramic art are. It seems we have a tendency, however, to either venerate and shroud ancient and exotic things in veils of mysticism or denigrate them as being primitive and unsophisticated. I for my part doubt that we humans have evolved, or devolved for that matter, a great deal in the last ten thousand years. It is comforting and encouraging to think that ordinary humans, not so different from you or me, should be capable of creating the wonders of the ancient world with simple and ingenious tools made with their own hands. We moderns tend to outsmart ourselves, needing the right designer built tool for the right designer built job and hang the expense. More often than not I find myself bemused by the complex and clumsy paraphernalia available in tool stores. Having effective and accurate tools does not need to be either difficult or expensive. 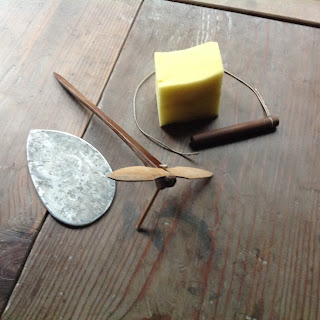 I have heard said that “If you can’t make a board of pots that are all the same then you are not a potter, you are an improviser”.  An uncompromising viewpoint, but valid in its way. Most certainly the ability to make pots which are uniform in size and shape is vital, but the next logical step is to go beyond that and make pots which are a set regardless of shape and size.

The solution for potters in the west for uniformity when making pots on the wheel was throwing to a point. When throwing off the hump however the volume of clay on the wheel is constantly decreasing and so a set point in space in relation to the wheel head is meaningless. The oriental potters answer was the “dragonfly”, or “tombo” in Japanese. This simple tool measures the diameter at the rim of a pot, and the internal depth at the same time. 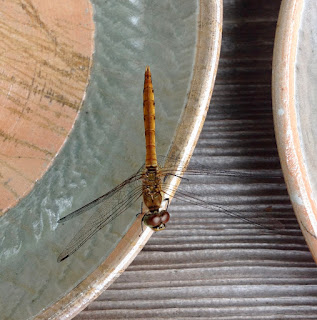 Traditionally this tool would have been whittled from aged and dried bamboo, and a new dragonfly would be made specifically for each sized vessel to be thrown. The result of this is, of course, that one begins to accumulate an ever increasing stock of Tombo, and it becomes frustrating when one searches for a specific size among the flocks of bamboo dragonflies.

I have seen kits for Tombo in shops, even in Mashiko, which other professional potters agree are virtually useless. And they are not cheap. There must be a better way.

My solution was to carve bamboo from our grove into a single dragonfly body with sets of interchangeable wings and legs in incremented sizes. It is then a simple task to assemble the tombo for each new shape by selecting the appropriately sized wings and legs from the set, and then returning them after each throwing session. 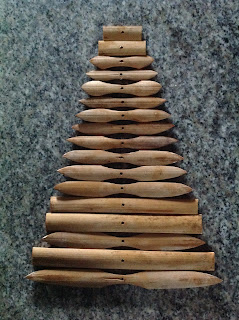 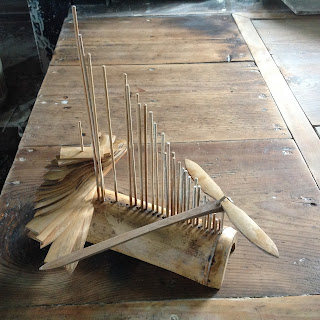 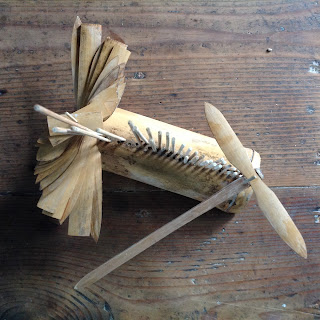 But who in the west has access to such materials?

I suggest that you take a walk through your local Asian grocer, or China town if it is convenient. You will find packets of inexpensive wooden or bamboo chopsticks, I prefer the Japanese style, shorter and more tapered and with square ends. There will usually also be bags of bamboo skewers, in two lengths but the same diameter, which is usually 3.2 millimeters, but check just in case. Now go to your local hardware store and buy a 3.2ml drill bit. In the thick end of the chopsticks drill two holes, perpendicular to each other, and slightly offset. If you slot the skewers through the holes and cut the length to the diameter and depth that you require your pot to be in its wet state, you now have enough tombo to last you a lifetime.

Let’s work on a standard Japanese lidded rice bowl as an example. The diameter finished should be about 13.5 cm. If your clay has 10% shrinkage then your wet diameter should be about 15cm (15 minus 1.5 equals 13.5). Cut one of your skewers to the exact diameter that you want your wet pot, that is, 15cm. Poke that through one of the holes in your chopstick so that it is sticking out equally on both sides. This is your horizontal diameter measure.

The depth of a rice bowl should be about 5.8cm, so your wet depth should be about 6.5 (6.5 minus .65 equals 5.85). Insert a skewer through the perpendicular hole till its tip is 6.5cm from the horizontal skewer. Now hold the pointy end of the chopstick, as if it were the tail of a dragonfly, with the 15cm skewer horizontal, like a dragonfly’s wings, and the 6.5cm skewer pointing down like the legs of a dragonfly. If you place this tool over and into your bowl, the tips of the horizontal skewer will measure the rim diameter and the vertical skewer will measure the internal depth.

I would usually leave the end of the vertical skewer sticking out the top a little so that the tool could be flipped over and used to make shallow dishes. The “tombo” for the slightly smaller female rice bowl, for example, is 13cm in diameter and 5.5cm in depth, but I leave the top extended about 1.5cm. Shallow dishes made with this “tombo” are quite a convenient size for small serves of condiments or, when inverted, will fit neatly inside the larger rice bowl to form a lid.

The sharp end of a skewer is also an excellent needle tool, and the narrow end of a chopstick is a very good pegger, a tool used to compress the join lines, where spouts are attached to teapots for example.

The “tombo” is a simple and elegant tool, and, once used to it, requires no more time than a pointer and far less than measuring calipers. Any measure, however, only provides you with the parameters of a form, not the profile.

Depending on the tools which one uses to eat, the surface and form of a pot varies a great deal. For many pots in Japan where chopsticks are used an uneven surface with heavy throwing rings is perfectly acceptable. A rice bowl, however, should be smooth so that the rice can be gathered together easily with chopsticks. It is therefore necessary to smooth the throwing rings from the profile and provide a regular curve in the bowl with a throwing rib.

Traditionally throwing ribs are made from slow growing, fine grained hard fruit woods like cherry, and they are beautiful. No matter how hard or fine grained a wood is though, after a thousand pots the grain will begin to stand out where the soft parts wear away. The surface area increases, as does the drag on the pot. That may be fine for thick pots made of coarse clay, but for finer clay and lighter pots the drag promotes distortion in the fired work.

Flexible stainless steel ribs are less distorting, but tend to cut the surface slip off and “raise the grain”, so to speak, of fine clays, opening the surface rather than compressing it. I prefer throwing ribs made of Perspex or aluminium, grainless and resilient, but wearing to a soft edge which allows the slip to remain on the surface. The edge will compress the clay and bring the finer particles to the surface without undue drag and with considerably less distortion.

The most economically effective solution is to go to your local variety store and purchase the cheapest plastic protractor and set square set available. The curve of the protractor is perfect for internal curves and the set squares are ideal for external surfaces.

The other, and what I believe is the main, cause of “S” cracking is uneven drying. Clay in it's wet state is extremely flexible, so if the rim of a pot dries quickly, shrinking as it does, the wet base will flex to meet it. As the base dries, however, the rim is now inflexible and so the base must shrink out to meet it, shrinking away from the centre, and the stress relieves itself in an “S” shaped crack across the centre of the pot. Base thickness also affects this for the same reason, as a thick base dries slower than a thin foot ring. The best ways to fix this are to slow down the drying of pots in a damp room or under plastic, keeping them out of the breeze, or to maintain a base thickness equivalent to the wall of the pot, or both.

During the wet season in Japan pots can take weeks to dry, often going moldy before they are firm enough to trim. This is of course the ideal time for making pots that require handles or assembly, as the slow drying minimizes the possibility of cracking.

For deeper forms, green tea cups (Yunomi) or bottle forms, a long handled throwing rib called a “Kotte” is necessary, if you require the pot to be smooth on the inside. One presses it from the inside of the pot, supporting the wall from the outside with ones hand, to define and compress the internal profile.

Although chamois leather is the preferred material for smoothing rims, a piece of plastic cut from a clay bag will smooth rims equally well and at far less expense. A friend of mine puts a layer of silicon on the edge of his sponge to smooth his edges, curling it over the rim after he has removed the excess slurry from the inside of his pot. Any sponge will do. I rarely use a chamois personally, finding that, with the fineness of my porcelain blend, the skin of my fingers is quite smooth enough.

The long and the short of it is that no great expense needs to be spent on tools in order to make good pots on the wheel. The simplest of tools, the cheapest and most accessible of materials, found objects even, can be used to achieve high levels of craftsmanship. What is necessary is a mastery of self and a level of skill which can only be achieved by persistence and practice.

Tradition is merely a system of education by which accumulated experience is passed down from generation to generation. It should not be a set of rules which restricts our creative process, but rather a support system that sets them free. Too often we mistake tradition for being an emulation of the past, forgetting that any form of emulation is by definition less than the original. Emulation is only useful as a learning tool, as is repetition. In the Japanese Sensei-deshi (Teacher-disciple) system of passing on tradition, the onus is not on the sensei to teach, but on the deshi to learn. What to do and how to do it can be learned by observation. Mastery of those skills can only come from experience. Understanding can only come from asking “Why?”

It is very easy to be blinkered by the periphery and paraphernalia of an art or craft, to not see the forest for the trees. It is not the tools that make great pots. Not the wheels, be they made of zelkova (keyaki) wood or aluminium; be they kick wheels or electronic drive. Not the throwing tools whether they are made of “sakura” (cherry wood) or bamboo or plastic. Not even the kiln, if it uses twenty tons of red pine or 400kg of scrap. What makes a great pot is a potter working in collaboration with the forces of nature, sloughing off the detritus of convention and addressing the issue of what it is to be human, a part of nature, expressing ones self through clay.