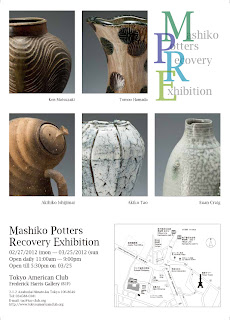 It is still dark as I drive through the snow to Tokyo on Monday morning. In the back of the little truck, wrapped snugly and packed safely in boxes, are 107 pieces of my pottery for the exhibition at the Tokyo American Club. The exhibition of five master potters from Mashiko is being held to launch the next stage of Mashiko's recovery after the great earthquake.  Ken Matsuzaki, Tomoo Hamada, Akihiko Ishijima, Akiko Tao and I will be exhibiting in the Frederick Harris Gallery for four weeks, and the Tokyo American Club will be donating the proceeds from sales to earthquake relief. Now that many of the kilns are rebuilt in Mashiko, the task will be to get back in production, get the vessels out to the world, and get mashiko back on  its feet again. 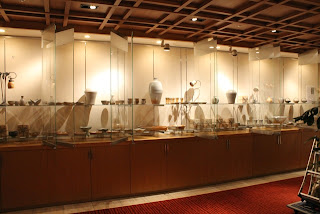 I arrive at 9:00 am, having navigated through Tokyo peak hour traffic to the club which is situated between the Russian Embassy and the Afghanistan Embassy, and pull into the secure car park. My dirty little truck seems incongruous amid the luxury cars, and the valet seems to enjoy the novelty! 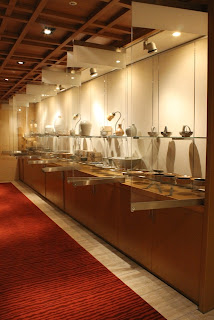 The other potters arrive around the same time and we set to the task of unpacking the work and setting up the exhibition. Several of the gallery committee members show us the ropes and help us get organised. Each potter has one of five large glass cases to display the work, and we joke and laugh as the exhibition starts to take shape.


The potters represent different aspects of Mashiko pottery and our work is quite different. I think the balance is very good, and say so to Ken who agrees;

"この展覧会は非常にバランスの良い５人です不協和音ないのが珍しいです、海外でもやってみたいですね." 松崎健
("This exhibition is an extraordinarily well balanced 5 person show without any discord, which is rare. I'd really like to show this overseas." Ken Matsuzaki)

The exhibition is opened by the president of the Tokyo American Club, Lance E Lee at a formal reception. Each of the artists give a speech, introducing themselves to the guests and explaining the process and philosophy behind their work. The speeches need to be translated into English on the spot, and I find myself as interpreter and artist!

The Mayor of Mashiko, Tomoyuki Ohtsuka, makes an official speech as part of the opening ceremony. He is well prepared, with an English speech that he delivers with great sincerity. He calls each artist to stand beside him as he introduces them.

"Good Evening, my name is Tomoyuki Ohtsuka, I am the Mayor of Mashiko

I would like to thank the historic Tokyo American Club for opening the Mashiko Potters Recovery Exhibition today.

As you all know, Mashiko was severely damaged by the Great East Japan Earthquake in March of last year, but with the support of the international community Mashiko is gradually recovering. Supporting exhibitions such as this is a great encouragement for the recovery of Mashiko. As representative of the town of Mashiko, I offer our sincere gratitude.

Cultural power is the power to create something, is it not? I believe in the cultural power that Shoji Hamada and the potters who followed him have nurtured in Mashiko. It is fair to say that the work of the potters introduced here today (at the Frederick Harris Gallery) is the fruition of that cultural power.

I would like to introduce the 5 Mashiko potters introduced here today.

It is said that Japanese pottery is firing first, clay second and craftsmanship third, and Ken Matsuzaki’s pottery, of course skilfully crafted, incorporates the merit of the Oriental Noborigama climbing kiln and Anagama tunnel kiln through his personal wood firing process, to create vessels which could only be made by Ken Matsuzaki’s hand.

Tomoo Hamada is, as I’m sure you all know, the grandson of the potter Shoji Hamada, but, while using Mashiko clay, Mashiko glazes, and firing in a Noborigama to preserve the Hamada tradition, without copying the work of Shoji, is creating the next generation of Hamada pottery.

Then there is Akihiko Ishijima who, in the functional pottery town of Mashiko, rather than functional work, creates works which appear to be three dimensional vessels trapped in two dimensions, and his expression through clay is fascinating.

The pottery of Euan Craig, who studied in Mashiko, with an Australian sensibility and a Japanese spirit, creates ceramic art which combines both beauty and function in pottery for use.

And recently the world of pottery has seen the advance of women, and Mashiko has nurtured many female potters. Akiko Tao, a lady potter, uses the now rare kick wheel to produce her fresh and powerful vessels.

The work of all of these artists is rich with the fragrance of Mashiko, and I’m sure they will bring pleasure to you all.

In closing, I would like to express my deep thanks to everyone at the Tokyo American Club Frederick Harris Gallery and all those involved in bringing about this exhibition." 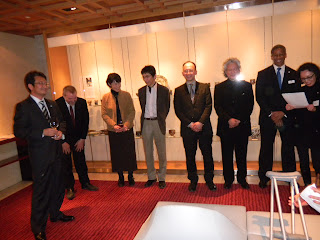 I am proud and humble to be a part of this exhibition. Even though I do not live in Mashiko now,  it will always be a part of me. 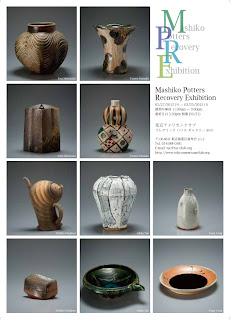 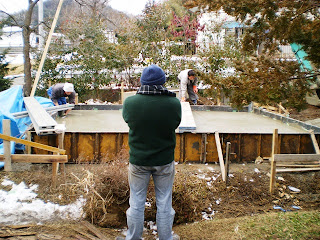 The stinging cold strikes my face as I open the shutters to the predawn light. It is snowing, again...still...I have never known so much snow. My first winter in Minakami is proving to be a challenge. Closing the sliding window, I bend down to the wood stove. I drag the last embers from last nights log to the front of the stove and add kindling and heavier wood on top. I close the hatch and open the draft, coaxing it into flame. Before long it is roaring, chuffing through the draft vent like a steam engine. I stand beside it, looking out the window at the burgeoning dawn, letting the room warm a little more before getting the children out of bed. There is a sooty brown icicle hanging from the end of the chimney, the condensation freezing as it exits the chimney, how can the smoke cool so fast?
Each morning I watch the sun rise beyond the valley, a little earlier every day, a little further east. It rises like a golden orb between the horizon and the heavy blue grey clouds, a halo in the misty distance through the crystals of the snow. The white surface of the snow sparkles like a sea of diamonds as the light catches the icy crystals. Movement in the garden catches my eye. A cock pheasant walks across the snow in the front yard. His feet leave a small trail of stars behind him, I wonder that his bare toes don't freeze. He stops beside the compost heap, looks around and begins to chirp his raucous call. With each squawk a small puff of steam escapes his beak. He begins to scratch in the compost, occasionally raising his head to call his mate. She does not come, let us hope she has the good sense to stay in bed.

Further beyond, a flock of starlings gathers in the leafless branches of the persimmon tree. They peck and feed on the dried remnants of the fruit hanging there. We did not pick the fruit last year, not knowing the levels of radioactive material in our own garden, but knowing that it would concentrate in the fruit. We will have the soil tested when we can afford it, the levels vary so much from place to place...so far as we know Minakami is safe, but one must be cautious.

A white heron wings its way down the valley through the snow as the sun disappears within the cloud bank. The sides of the stove glow red, the kettle begins to sing. It is time to wake the family. 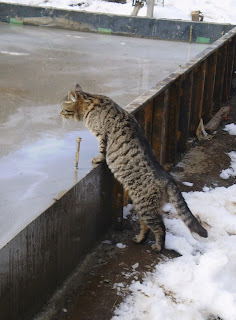 The concrete foundations were poured last month, and we let them cure under an insulated tarpaulin with flood lamps underneath to keep it from freezing. The cats have been curious, occasionally playing tag through the tarpaulin, chasing each others movements as if they were mice under a blanket. Once the slab was revealed, Jiji (the alpha male) made an inspection, and, satisfied, they have now lost all interest. 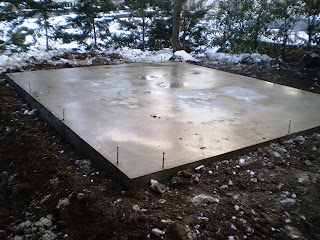 It is a thing of beauty. 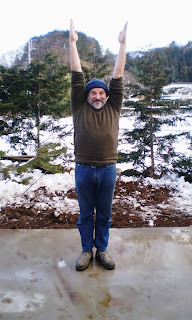 This is where the chimney shall be... 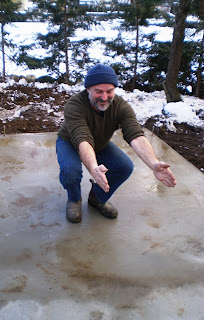 and here shall be a fire box!

The next snow was only shallow, and made the slab look like a fresh, white, stretched page waiting for the artists brush. The snow continued, though, and parts of Minakami had 130cm. We only had 30 or so, sheltered in our valley, but it has been a challenge none the less. The little truck is only two wheel drive, and getting through the snow to fetch the timber for the kiln shed has been an adventure! 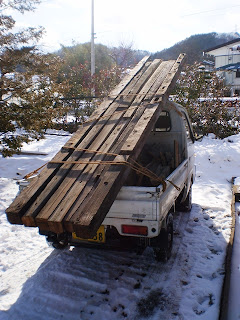 Our friend Raku has been helping, but it is too cold outside to do much constructive work, so we have moved the timber inside, into the room with the holey floor. There I will cut the joins so that, when the snow clears, we can fit the frame together quickly.

But the snow seems to linger, and even as it melts it forms great icicles which hang from the eaves and threaten to pounce upon the unsuspecting who may happen to pass below. 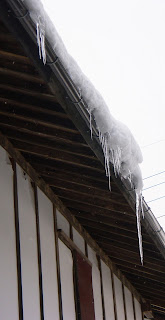 I drive the boys to the bus stop, and Sora to school, for I feel it is too cold to make her walk. Above the highway there is a digital temperate display. It tells me it is -12C. Not as cold as parts of Europe this year, but cold enough for me. I return home, careful as I enter the house to steer clear of the talons of the winter beast that lurks on the roof. His great clawed hand reaches across the guttering, and I have taught the children to be wary of his grasp.

Inside, our home is warm and safe, and little by little we are returning to something close to normal. It will still be a while before my pottery is in full swing, till the kiln shed and kiln are built and I am firing again, but those things will come. For the moment there are more important things to do; to keep the fires stoked and my family warm; to put hot food on the table and provide a hot bath to follow; to listen to them, to hug them, to tell them that I love them and that everything is OK. To make silly jokes with them and laugh till we cry. I will protect them from the winter beast, and nourish them with love. When the time comes to pot once more, it is for them that I will make my work, and what a joy that will be!
Posted by Euan Craig at 23:26 12 comments: