The sun is a pale smudge in the overcast sky, like a dusty light globe beyond a shoji screen. Mist shrouds the mountains, sometimes turning to light rain, occasionally to a torrent. It is Tsuyu (梅雨), the rainy season, called the "Plum Rains" because this is the season when the plum trees bear their fruit. Every day is grey and pensive as I work in the studio, trying to catch up with lost production, but knowing that there are limits to what I can achieve. One man can do anything, I am sure, but not, it seems, everything.

Last winter was long, cold and snowy. I discovered that trying to make pots in the Minakami winter was a challenge that I was not equal to. With occasional lows of minus 15c and highs of minus 5c, just keeping the house and family warm was a full time pursuit! I must rethink my annual schedule to fit into this new climate, making enough pots from spring till autumn to be able to concentrate on firing during the winter. It will take a couple of years to get back into full swing. 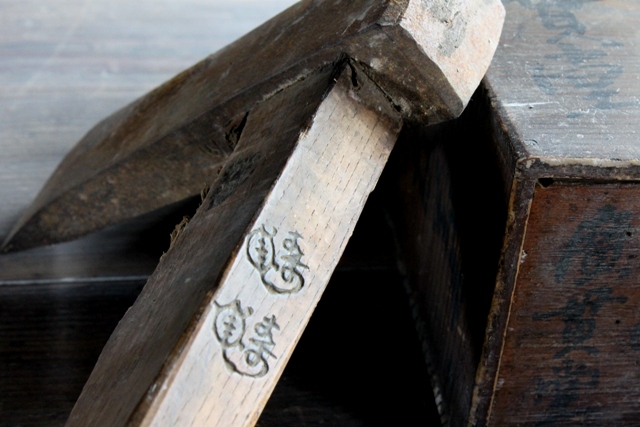 Among the remnants of the generations past who have dwelt in this house was an axe. It reminded me of the story my father told about his grand fathers axe, which has had two new heads and three new handles but is still the same axe.

This axe, however, is still in it's original condition, and it worked hard to bring us through the winter safely. It's head is heavy and narrow, reminding me of the Canadian wood splitter I used on my Uncles farm in Australia. The haft is a heavy, dark wood, polished to a soft sheen. On the haft is a mark, a brand burnt into the wood, of a tortoise whose tail twists into the symbol "Kotobuki" （寿）, which signify longevity and good fortune.

The same mark can be found on other tools in the house. There is a bamboo "Kujirajaku" (鯨尺) which was a ruler for measuring cloth when making kimono; a chisel handle also bears the brand. These tools were finely crafted by the same hand, though when they were made, during the hundred and forty years that this house has stood, and by whom, remain a mystery. Whoever this unknown craftsman was, they branded these tool to say, "I made this, and take responsibility for it. May it serve you long and well." It has served beyond the craftsman's lifetime, beyond memory of the craftsman. This is the essence of "Mingei". 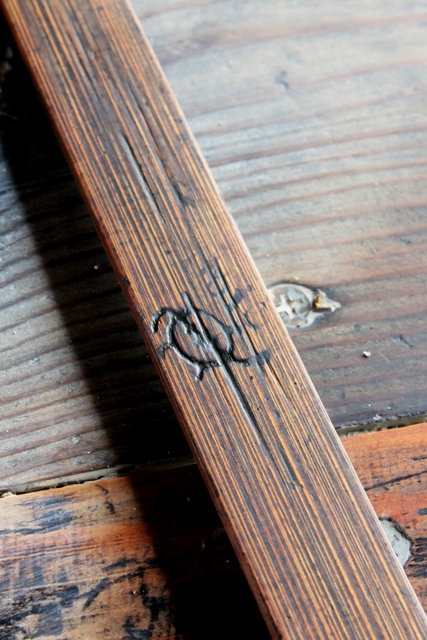 I asked Shimaoka sensei one day, many years ago when he and I were alone in his studio as I watched him throwing and wedged his clay for him; "What is the future of Mingei?"
He laughed, and said, "Euan, you do ask difficult questions!"

He thought for a minute, then continued.
"There are two meanings of 'Mingei', one is the functional art which was born from the healthy lifestyle of traditional societies, the other is the functional art which we of the mingei movement create which is inspired by the first. Sadly, traditional cultures have been usurped by modern industrial civilisation and what remnants there are have all but lost their vitality in the face of 'progress'.
I do not hold much hope for them."

He removed the bowl he had been making on the kick wheel and placed it in the last space on the ware board. I passed him a fresh piece of clay, and he began centreing it as I removed the full ware board and brought a new empty one.

"There is, however, great hope for the second 'mingei'." He said, "By studying and understanding the beauty of functional art from traditional cultures, and by choosing to live a healthy and simple life in harmony with nature, modern 'mingei' artists can create art work which can enrich peoples lives. People living in a modern and artificial environment need the touch of real things, made with hand and heart, and mingei artists can help to create a healthier society."

He worked on quietly after that, making his quiet pots that spoke so eloquently of the art of living. Living in the moment, spending the days in rhythm with the seasons. 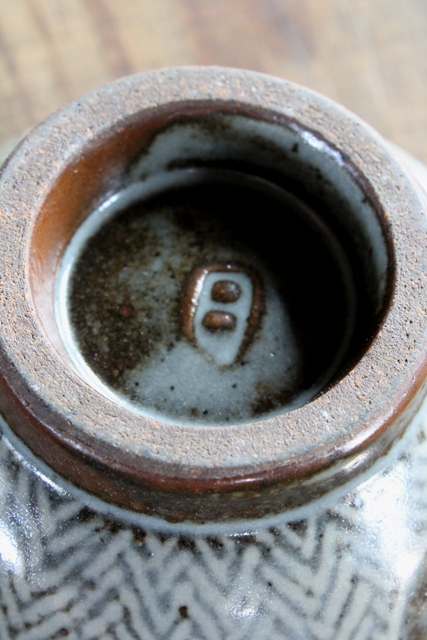 Shimaoka sensei always stamped his pots. It was a simple mark, a single character, "Ta" (タ) for "Tatsuzo", his own name. It was a mark that said, "I made this, and take responsibility for it. May it serve you long and well."

Hamada Shoji sensei did not sign his pots. He wished to work in the spirit of the unknown craftsman, and that his pots should be his signature in and of themselves. His grandson, Tomoo, told me a story of when an interviewer had asked Shoji what he thought of the Mashiko potter down the road making copies of Hamada sensei's pots.
Hamada laughed and said,"I don't mind at all. In a hundred years time people will think his good pots are mine and my bad pots are his!" 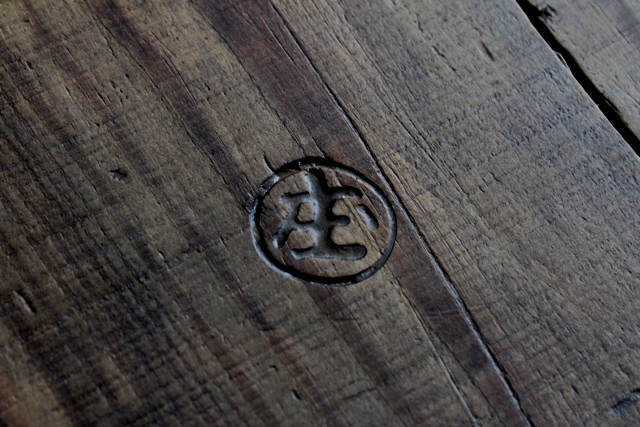 Hamada did, however, sign his boxes, with a description of the vessel inside, and a stamp of the first character of his personal name, "Sho" (庄) for "Shoji". The same mark can be found on his personal ware boards, burnt into the wood as a brand.

And so, I stamp my pots with my personal mark, a stylization of my initials, "EC". But I also add an extra mark which changes each year. Every vessel bears a mark which indicates in which year of the Japanese zodiac it was made. 2012 was the Year of the Dragon, and so every vessel made that year bears a dragons head, breathing fire. 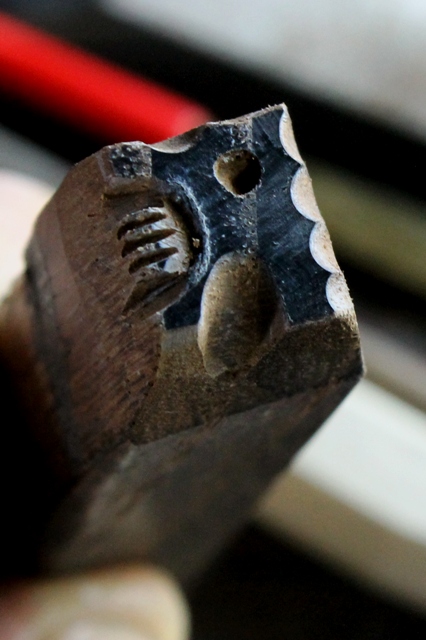 The stamp was carved from a 140 year old piece of hard wood which was cut from the original frame of this house when we were repairing the upstairs floor. 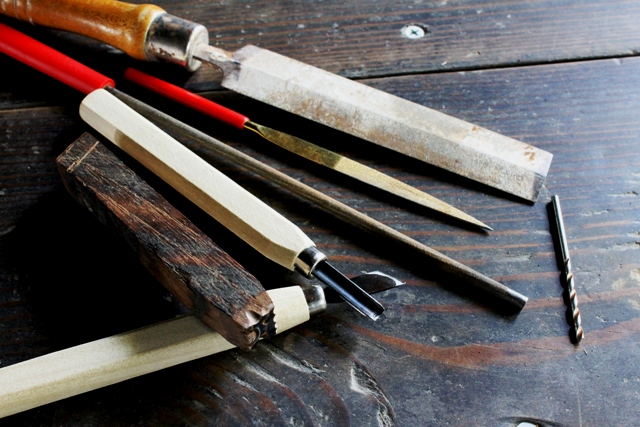 This year, 2013, is the year of the serpent. I have carved the new mark on the other end of the dragon stamp, and every vessel will bear the stamp of the serpent this year. 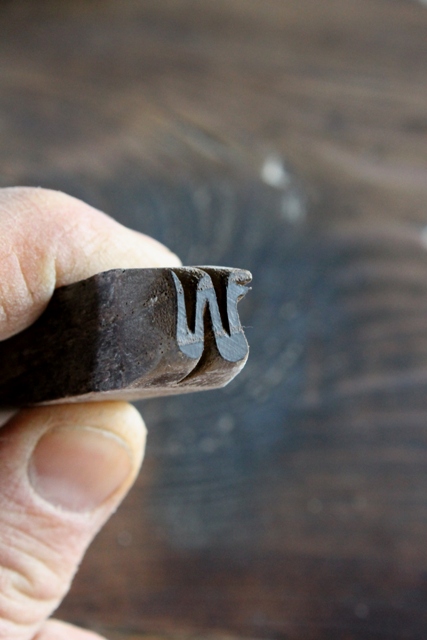 We learn from tradition, from the past, but we each must walk the same road for the first time. Seeing it with new eyes but finding a beauty which is common to us all. Some ancient art can feel very fresh to us, and contemporary works seem ageless. Like my grandfathers axe, old and new at the same time. Whether it is today or in a hundred years time, someone may hold one of my pots, may lift it to their lips, and take joy in living. And they may look at the marks on its foot and wonder who made it.  Whether they know me or not, it doesn't really matter.

It is my way of saying,
"I made this, and take responsibility for it.
May it serve you long and well." 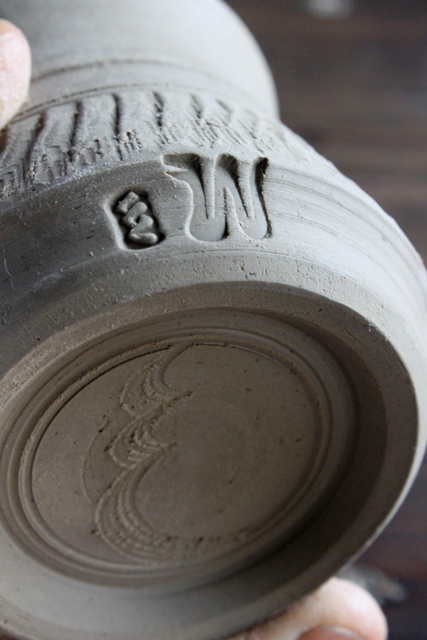 For those of you with an interest in "mingei", you might enjoy my post from 2009 entitled, oddly enough, "Mingei".