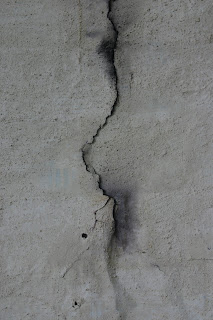 We have fired the new kilns. We stacked on the fourth, and Kusakabe san started firing that night at about 10:00pm. When I arrived and started firing my kiln at 7:00am on the 5th he was at 380c. Because there were lots of raw pots in the kiln I aimed at a fourteen hour firing. The first 600 degrees are the most dangerous for raw pots, with the crucial temperatures being 350c, when the chemical water is burned off, and 573c when the silica expands. 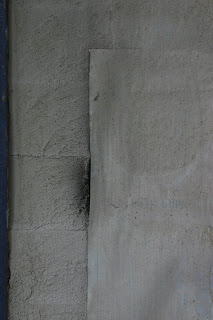 Kusakabe san sealed the kiln door with refractory mortar slurry on newspaper, like wallpapering, and it seemed like a good idea so we did it to my kiln too. As a result the kiln was sealed much better than my normal firing and so it was much more heavily reduced. We reached temperature, put in 2kg of soda ash and finished firing in 13 hours. Unfortunately I forgot to take my camera so there are no photos of the firing! We fire again for "Fantastic Fire" on the 26th, so I will do a more detailed record then. Kusakabe sans firing continued until 3:00pm on saturday the 6th, and reached the horrifying temperature of 1375c, and we had to desperately drag it back down to 1320 under a heavy reduction before we finished! 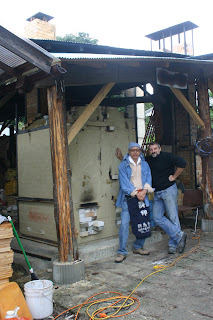 We unpacked both kilns on the 9th, mine had much more carbon trapping than I expected, but there were 0 losses! 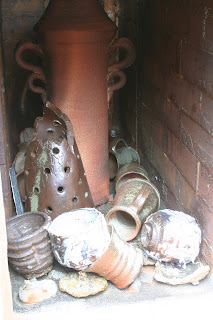 Kusakabe sans kiln had excellent ash glazing, and though many peices were lost the results of the suviving work was very rewarding. Next time will be better!
Posted by Euan Craig at 18:54