The sun climbs tentatively through my bedroom window as I wake to the nightingales call. Just beyond the first range of peaks a bank of clouds reaches tenderly around the shoulders of the mountains in a misty embrace. There is a raven building a new nest on the top of the power pole outside. It is spring.

We raise the shutters in the children’s room and shake them from their slumber. Though they sometimes cry out in the night still, they seem to sleep more soundly with each passing day. A month has passed since the earthquake, and though there are still aftershocks, as many as eight or nine tremors of scale 3 or more every day, we are settling into a new routine.

After a breakfast of eggs and ham on rice, Canaan and Rohan go off to primary school. I walk with them to the corner and watch them down the hill as they join up with their new friends. The raven flies over my head with a broken branch in its beak.

I take the path beside the stream to the main road. Other children are waiting beside the bridge with a grand-parent and a mother watching over them. I greet them as I cross the bridge and walk on to the convenience store. I check the labels on the milk, it comes from Gifu. I buy two litres. 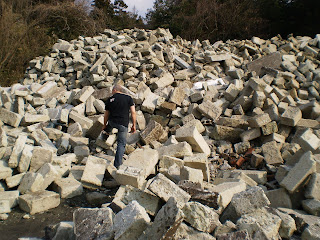 We moved most of our remaining personal belongings last weekend and the hot house is now full. Our friend Take-chan borrowed a truck from a work mate and did the round trip with us. My next challenge will be to build the studio and kiln shed so that I can move the pottery here and get back into production. Volunteers have been helping with the clean up in Mashiko, sorting out the bricks from the collapsed kilns. Mashiko, Ichikai and Haga have all been officially declared disaster areas, though they are overshadowed by the devastation in the north east. In each of the towns there are designated areas for the debris. There are huge piles of rubble, of broken pottery, of stone blocks from store houses, of masonry and timber and furniture…piles that dwarf the heavy machinery used to sort them. 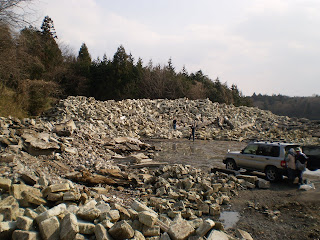 As I walk back up the hill to the house I pass Sora coming the other way on her way to high school. She has promised to meet her new friends from the basketball club and walk with them to class. We joke and laugh as we pass, and I stop for a moment to watch her walk away, her curly hair bouncing behind her as she goes. As I walk up the driveway the raven brings another twig to the precariously balanced collection gathering at the top of the power pole.
I walked around the empty house in Ichikai on Sunday evening, the sound of my steps loud in the dusty air. So many memories were made within these walls, the sound of baby’s laughter, the company of family and friends…I carry them with me now. The house is just a house.
I make Mika a cappuccino while she prepares Sean for preschool. It is our first in a month, it seems so much longer. Sean comes into the kitchen to show us his new smock. Neighbours and relatives have lent us school uniforms for the kids. There are eight other new children at the primary school from the earthquake or radiation affected areas, so our children are not alone. The community here, the teaching staff and the local council are very kind and supportive. The number of refugees here has dropped, however, as people return to their homes. Regardless of the ongoing threat, there are many who choose to return as soon as they can to rebuild their lives, their careers, their schools. Issues of financial security and their children’s education outweigh lingering fears. I wish them well.
We drive Sean to the preschool. He runs ahead of us into the playground to climb on the jungle gym before we go inside. As we leave he calls out to us to come and get him early today. We promise that we shall. We drive away, waving out the window to him.
Today I am preparing for the exhibition in Tokyo. Gallery St.Ives has organised an exhibition for the Mashiko Earthquake Appeal, and I must deliver the pots tomorrow. Five potters from Mashiko have been invited to exhibit, and part of the sales will go to the relief fund. Ken Matsuzaki, Tomoo Hamada, Yuchiko Baba, Minoru Suzuki and I will be exhibiting our work from Saturday, April 16th till Sunday, May 8th. It is an honour to exhibit with them.
I sorted through the pots in the old house last weekend, discarding the broken work, selecting out the best pieces which survived the earthquake. This had not been my first priority, and only now do I begin to assess the damage to my pottery. Work which had been wrapped and stored in containers survived well, as did the tea bowls and yunomi which were in their own signed wooden boxes. Many of the pots which were on the shelves went crashing to the floor, but amid the shards it was surprising how much of the work survived unscathed. There is enough for this exhibition, and enough for the Mashiko pottery festival at the start of May…I wonder if there will be any customers?
Lining the vessels up on the kitchen table. Polishing them up and making sure they are in perfect condition. Listing them, numbering then, pricing them. Wrapping them up again and putting them into containers for transport. I have been borrowing a computer till now, which has helped keep me connected with you all, but we have set our own computer up at last, though the internet connection won’t come till a fortnight from now. Mika makes the list for the gallery on our computer, we download it to my MP3 and send it to the gallery from a borrowed internet link. NTT has provided free internet access to refugees at most town offices. 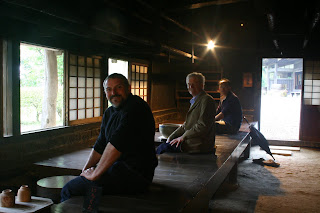 Though I began my pottery career in Bendigo, Australia back in 1978, I came to Japan with two canvas bags in 1990, to the traditional pottery town of Mashiko, where the National Living Treasure Shoji Hamada worked, to the home of Mingei. I was honoured to be accepted as a deshi to Tatsuzou Shimaoka, Hamada’s disciple and also a National Living treasure in his own right. And when I graduated, I chose to remain in Mashiko, to establish my own studio, and work towards being accepted here, not as a guest, but as a peer. After 21 years in Mashiko, I think I achieved that. It is very difficult to leave. 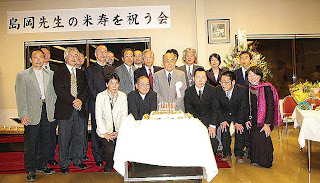 Tatsuzou Shimaoka, National Living Treasure, and his deshi at his 88th birthday, 2007 (Ken Matsuzaki 6th from right, me 6th from left)

The raven has continued to build its nest, and as dusk falls the structure seems quite solid and firm, meshed into the cross bar at the top of the power pole. Sean is excited to see how it has progressed. I tell him that the raven has probably come here from Mashiko, just like us, to make a new home. He likes that idea. So do I.
The kids are home, we feed them and bathe them and get them off to bed. Tomorrow I will deliver the work to Tokyo. I have a workshop to teach on Saturday and I will be in Gallery St.Ives on Sunday. Last year, Isaka-san, the gallery director, asked me if I considered myself an Australian potter or a Japanese potter.
“Born in Australia,” I said. “Made in Japan.”
Posted by Euan Craig at 22:41