How to build a kiln in just 4 days! 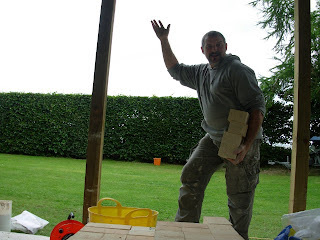 Welcome back to blog land! We have been off the air for a little while due to computer crash, but we're back on line and ready to go! It's a fortnight since my return from the UK, and lots has been going on, but before any of that I need to review Steve Tootells kiln building project in North Wales. 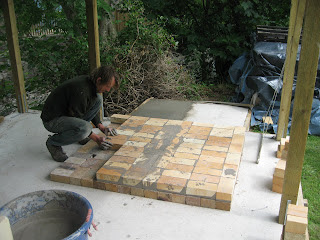 In earlier blogs you will find a layer by layer description of the building of Laura Inoues kiln in Nagano, and a series about the kiln building workshop in Mashiko. Every project is different, and it is important to be flexible. With great thanks to David Frith and Steve Tootell, the kiln shed was built, the floor was beautifully flat and level, and all the building materials were on site ready. The only foundations that needed to be finished were under the chimney, and Daniel, Nicola and I finished that off first thing on the first day, so that the chimney could be started on day two.
Steve did the first layer of bricks dry with bricks that had a channel underneath. This will allow air to get underneath the kiln, reducing heat stress on the slab during the firing and preventing moisture build up between firings. 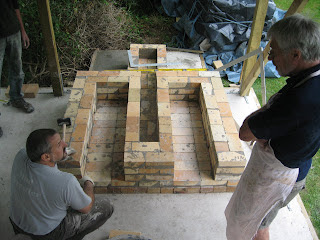 The next few layers of hard fire bricks up to the fire grate was the same as the other kilns, save that David has a brick cutting machine! The proportions of this kiln is 6 brick lengths deep and 6.75 brick lengths wide. The three quarter brick length is the width of the exit flue. By careful cutting and laying of the bricks only six bricks need to be cut for the second layer, then one brick per layer after that.
Fire clay was used instead of mortar. I prefer fire clay to mortar, as mortar sticks the brick together too hard, making repair to the kiln difficult later, and it dries very quickly making adjustments during brick laying difficult. I find fire clay is better, and usually cheaper. The main objective is not so much to bond the brick together as with a brick building, but to fill any gaps between the bricks and seal the kiln. A metal frame is set around the kiln to give mechanical support to the kiln, and the kiln needs to flex to accommodate expansion and contraction during firing. Mix the fire clay into a large container of water using a glaze mixer and you can adjust the mixture thickness as you go. When it is the consistency of thick custard that should be fine. the bricks can then be dipped into this mixture and laid directly. The fire clay should only be about one or two millimetres thick between layers. If you find that there are variations in brick size a thicker mixture can be made by adding fine grog to the fire clay and this can then be used to make a thicker layer of mortar where necessary. 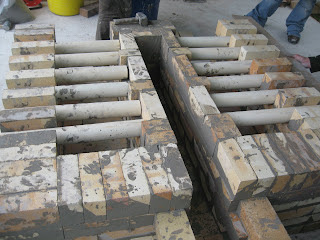 The first real challenge was the fire grate. In japan I use "I" shaped kiln props on their edge for the fire grate, but these are not available in the UK. A metal fire grate could be used, but it burns out fairly quickly, meaning extra running cost, and can cause iron spotting on the pots. 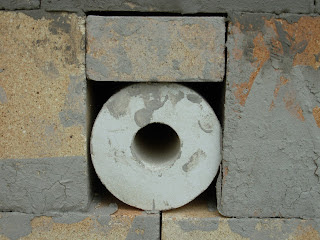 Our solution was to use thick cylindrical kiln props, which Steve had acquired from Stoke on Trent, on their side, set through the wall so that they can be replaced if necessary by sliding new ones in from the outside. We decided to finish work on the first day after the fire grate was finished. 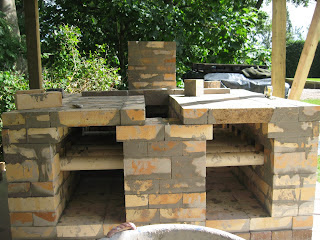 Our next big challenge was the kiln floor. Double length bricks are apparently unavailable in the UK, so to bridge the fire boxes and make the kiln floor we had to use one and a half length bricks. That is in fact the exact width of the fire box so we made a step of one eighth brick each side on the layer below and corbelled the floor layer. 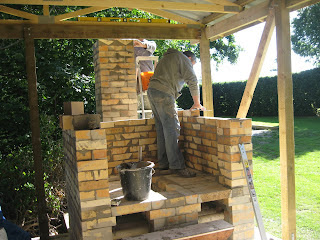 The outer walls and chimney were then constructed, regularly checking for squareness and level. The walls of this kiln are in fact lower than the kilns of this design that I have previously built. That is because the arch bricks for this kiln had been taken from an old kiln and we intended to use the original arch former. As that arch was deeper, we made the walls lower so that the top of the inside arch was the same height as my original kiln design, and so the inside volume and flame flow would be the same. Day two finished when we had finished the outside walls and the chimney damper. 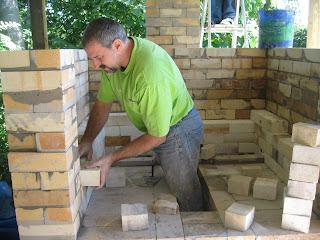 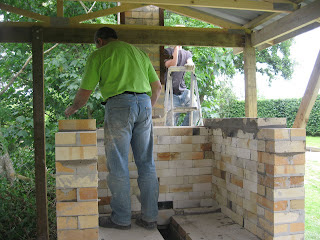 A soldier course of bricks laid side by side on top of that, bridging both layers, ties the wall together and gives a solid base from which to spring the arch. The rest of day three was spent re welding the metal frame, which must be attached to the kiln before the arch goes on. 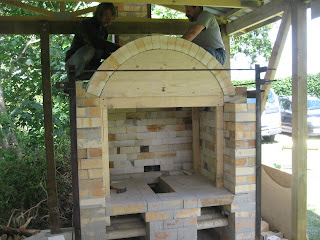 On day four we addressed the arch. The original arch former had shrunk over the years so a new arch former was made by Nicola and Daniel. A frame was constructed underneath the arch former so that when the bricks had been placed the frame could be collapsed and the arch former just drop out. 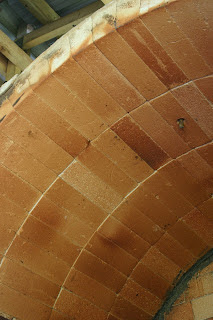 The place in Czech where the Seko twins work has a long history of ceramics, and the kiln builders there do not interlock the arch bricks, thus avoiding horizontal stress on the arch and eliminating cracking across the joints. So, we tried that method on this kiln. We also made the arch shorter, so that the kiln door could be butted up against it instead of trying to fit bricks under the arch every firing. 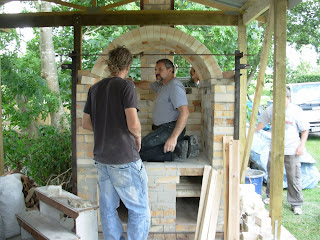 Once the arch was up we filled in the back wall, sealed the outside of the arch with fire clay, then a layer of ceramic fibre. 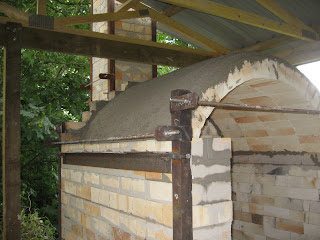 On top of the fibre will spread a thin layer of refractory adobe, then a layer of metal reinforcing mesh and the a thick layer of adobe. The adobe was made from fire clay, grog, sand, cement, sawdust and vermiculite, mixed with water to a soft workable consistency. Daniel and Nicola finished the chimney and we put up the chimney frame. 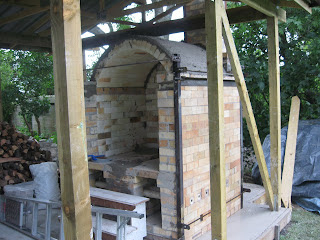 Lo and behold, an elegant and most excellent kiln! 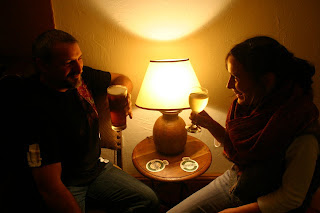 Throughout the whole process, our support team, Jane Tootell and Nicola's fiance Ina, provided us with delicious vittles, excellent coffee and copious amounts of the fuel necessary for any great endeavour, beer! 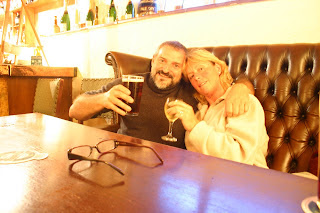 Everyone was so happy and contented they even laughed at my endless stream of jokes. Without our support team none of this would have been possible.
Posted by Euan Craig at 07:38