Storm in a Coffee Mug 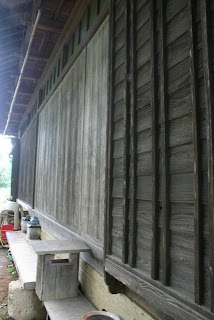 Typhoon number 11 is visiting us here today, so we have greeted it in the traditional way. This house has been standing here since the Taisho period, so it's close to a hundred years old now, though nobody is really sure. It has stood through countless typhoons, earthquakes, floods, recessions, and at least one world war. We even survived the level 4 earthquake last night without even waking the kids! We have closed the weather shutters as tradition has taught us to do, and we are safe from the elements. It is also a chance for us to enjoy what has become the traditional Craig family typhoon breakfast of drop scones and lemon butter. 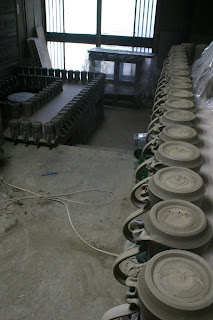 Funny thing, Tradition. All it really is is a system of passing on successful methods of survival. The conditions of nature that we live in haven't changed significantly for 10,000 years, let's call it 400 generations. There will inevitably be typhoons, earthquakes, torrential rain, forest fires, and all manner of natural events. Eventually someone realizes it's not very bright to build a house of grass balanced on a couple of round rocks on the banks of a river amid the tall rushes. So they build a house with heavy interlocking beams on a firm foundation of stone on the high ground with a safe space around it for the kids to play. This knowledge, and the skills to make it practical, are taught to the children, though they may not themselves have experienced any of those disasters in their lifetime. It becomes Tradition. Trees are planted that will mature into enough good timber to build a new house when the old one is no longer safe. 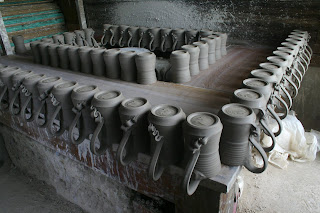 With the passing of the generations, innovations are made, new ideas, materials and methods, which improve the chances of survival, improve the quality of life. They then are added to or replace the Tradition. Even something as simple as a cup of coffee is the result of this process. You can't always guarantee that your drinking water is safe, and even today there are large numbers of the human population throughout the world who suffer from a lack of this basic necessity. Someone realises that if you boil it before you drink it you don't get sick, you survive, and that becomes tradition. 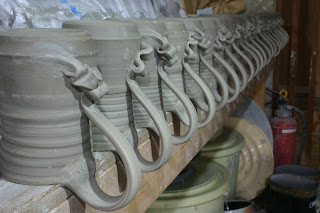 But if you let it cool and leave it in the open air and sunlight for too long it goes bad again, so we'd better drink it while it's hot. Hot water on it's own doesn't taste that good, but someone discovers these leaves, or those berries, make it taste and smell much nicer, and they seem to make you feel even better than just water alone! Welcome, Tea and Coffee! This too becomes a new and ever evolving Tradition.
The cup, however, gets hot, and burns our fingers, precious! What shall we do? Our answer in western tradition was to stick a handle on the side, so our fingers don't touch the hot vessel. Generations of innovation eventually gave us the pulled handle. In the 1920's Hamada brought the technique back to Japan, where it became part of the "Leach/Hamada Tradition", and pulled handles are known in Japan as "Leach Handles". 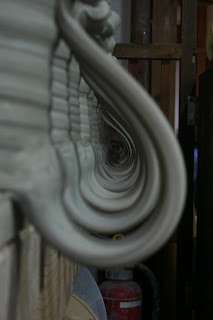 My innovation is to spring them from the rim of the pot, making the join over the inside and outside, thus spreading the contact surface and making the join stronger. The high handle also lowers the centre of gravity, so that no matter how much is in the cup it is comfortable to hold. The forces of nature dictate the curve.
Where tradition falls down is when we forget the real reasons why we do these things, and either adhere to them by rote or ignore them in deference to the vagaries of fashion or finance.
Recent experience shows that heavy tile roofs in a major earthquake will cause a pendulum swing which collapses the structure below, but there are those who won't use lighter modern materials because it is not "Tradition".
The land on the river bank is cheap, these thin veneer sticks cost less than proper timber, and if you stick vinyl on the outside... why, it's just like a bought one!
Does it matter if the vestigial handle on the bottom of your coffee cup is too small for one finger and the hot brew inside is in constant danger of cascading down your front, as long as it looks funky? 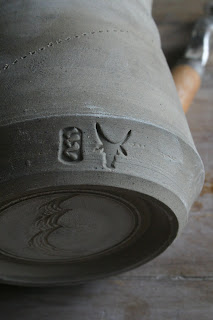 For me there is a responsibility that comes with the making of things. That they be safe, that they perform well the function for which they were created, and that they are beautiful. They need to be real, firmly grounded in human needs, and created in a way that does not cause harm to this environment upon which we and our children depend for survival. If they succeed in this they will stand the test of time and enrich the lives of those generations yet to come, standing beside other such works from the artists of the past . So, unlike the unknown craftsmen, I sign my work inside the foot ring by combing my initials, EC, and then stamp my logo mark on the outside of the foot ring, with a bulls head stamp. This tells that I made this work in the year of the bull.
It took thousands of years to build traditional society. It has taken industry, technology and greed a century or so to bring it to its knees. Yet, in just two generations Leach and Hamada have become tradition all over the world, and in only two years Lemon Butter and Drop scones have become tradition in our home on stormy mornings. I think that's rather a hopeful thought.