There is a lot of interest here in Japan (and internationally) in efficient and environmentally responsible wood firing. As a result many people are building kilns based on my kiln plans. There are now at least twelve that I am aware of in this area of Japan and many others in Australia, USA and Europe.

Last weekend I went to Nagano prefecture to build a new kiln for Laura and Giichi Inoue. Two of the participants from the Mashiko kiln building workshop, Sasase san and Yoneyama san volunteered their help, as did Kumon san, a potter from Nagano. A local potter, Okamoto san also came to help on monday.

As I have an exhibition coming up soon I could only spare three days, so we set ourselves a three stage target; fire boxes and up to the floor on saturday, walls up to the arch on sunday and the arch and chimney finished by monday night. It was a six hour drive on friday night, but we started work at 8:00am saturday morning.

The shed and concrete floor had been built be a professional builder so we were starting from a smooth and level base. Hooray! All the bricks and materials were new, no second hand bricks to clean or hedge around. Hooray, hooray! And Fire clay, not mortar, which makes laying the bricks easier as it stays flexible for minor adjustment and afterwards will make maintenance easier. Hip, hip, hooray! 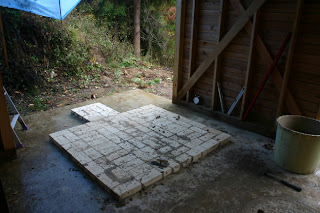 We lay the first layer with the bricks arranged in the pattern of the fire box and upper walls to make sure there were no mistakes in measurements, 6 bricks deep and 6.75 bricks wide. 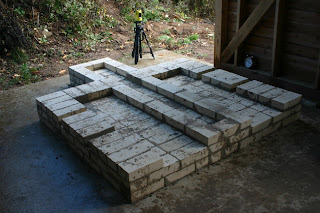 The third layer has gaps called "Mouse Holes" between the bricks at the sides of the fire boxes which can be opened up to let air in under the embers if they build up too much during the firing. 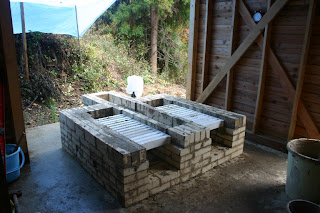 The fire grate is made of 39cm "I" shaped kiln props set on edge so that they form a natural pattern of gaps. These are slid into a channel so that if one prop gets broken during a firing it can be dropped down into the ash pit with a long rod and a new prop pushed in from the front. The whole lot can then be slid back into the original position along the channel which we made this time by setting that layer of bricks on edge also.This saved having to cut bricks, a time and energy consuming job. 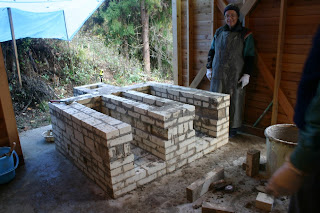 The flue was bridged at the back between the kiln and the chimney at the level before the floor of the kiln. 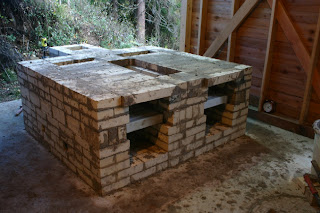 The floor of the kiln was bridged with double length fire bricks. The space between the flame entry ports has an angle cut to help the flame flow into the kiln. 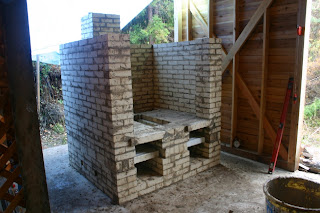 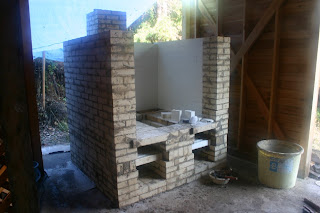 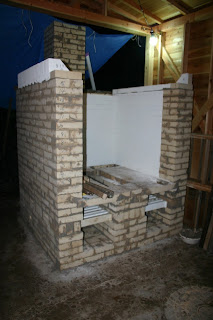 There is a difference between the height of the outside and inside walls wich is equivalent to the accumulated thickness of fireclay between the outside bricks. This is adjusted by cutting soft bricks to fit level with the outside wall. A "Soldier Course" is then layed to tie the inner and outer walls and give a firm springboard for the arch. The arch springs from skew bricks cut to an angle that is calculated based on the curve of the arch. 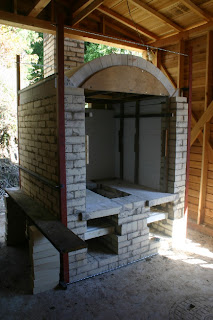 The Arch former and outside frame are set in place, then the arch brick are layed dry. Sasase san welded the arch in place, but it can be bolted together if you can't weld.


After tightening the angle iron frame the arch former can be removed and then the gap in the back wall filled in. 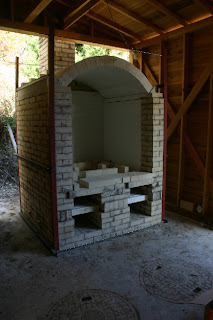 There is still a bit of finishing off to do for Laura, but there you have it, a kiln in three days.
Posted by Euan Craig at 10:22